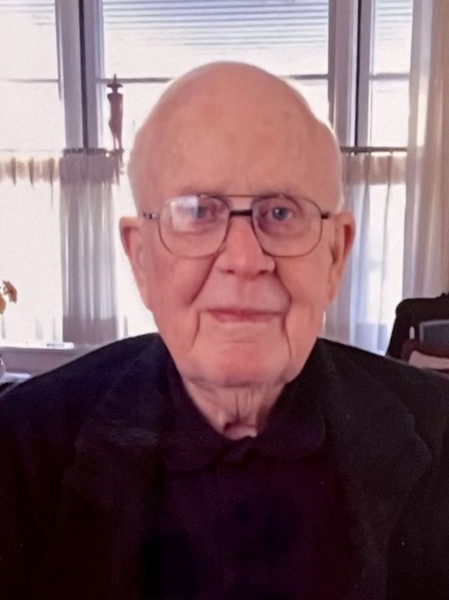 WELLMAN - Attorney Albion Jay Young, 94, passed away peacefully on Wednesday, January, 19, 2022, at Pleasantview Home in Kalona.
Albion was born November 26, 1927, on the family farm southwest of Donnellson, Iowa; the first son of Frank and Ada Tressia Woolley Young. As a child, Albion raised poultry on the family farm selling enough poultry and eggs to buy his own silver French horn. The French horn was to become the beginning of a lifelong love of music.
While attending Coe College at Cedar Rapids, Iowa, Albion volunteered for military service and became an Army parachutist. He served during the US occupation of Japan in 1947 and in the military band. Following military service Albion returned to Coe College and earned his Bachelor's Degree. While at Coe he played French horn with the college band and the Cedar Rapids Symphony. He was honored to play with the Coe band in Washington, DC at the inauguration of President Harry S. Truman. Albion went on to earn his Law Degree from the University of Iowa College of Law, passing the Iowa Bar exam in 1953.
Albion married Vionne Claudine Longstreth of Elma, Iowa on July 31, 1955. The couple started their lives together in Wellman, Iowa where Albion began his career practicing law. Albion served the people of Wellman as the town Lawyer for over 61, years retiring in 2014.
Albion was active in community affairs. He served as president of the Wellman Rotary Club, the Wellman Lions Club, the Wellman Community Club, and the Washington County Bar Association. Albion was City Attorney for many years and represented the Mid-Prairie Community School District. He served on the Wellman Savings Bank board of directors. Albion was active in the planning of the Wellman municipal building, the development of the community park, and the municipal natural gas system.
When Wellman lost its beautiful elm trees to Dutch elm disease in the 1960s, Albion headed the tree planting committee which planted about one thousand new trees in Wellman beautifying its streets and avenues.
Albion was an avid gardener. He enjoyed giving neighbors fresh vegetables during the growing season. Albion had a special interest in growing many varieties of tomatoes and took pleasure in bringing fresh tomatoes to many of the Rotary Club meetings he attended. Albion was an active member of the Wellman Rotary Club for 63 years, holding nearly all of the service Club offices and as a Paul Harris Fellow.
Along with gardening, Albion loved to play competitive Bridge. Albion achieved lifetime master's status and his bridge playing group won their share of local and regional tournaments. He played as a member of the American Contract Bridge League in Iowa City.
Albion was a member of the Asbury United Methodist church in Wellman where he and his wife Vionne enjoyed singing in the choir for over 40 years.
Albion was preceded in death by his wife of 65 years Vionne, as well as his parents, and cousin Dan Wooley. Albion is survived by his son Robert and granddaughter Anna of West Windsor, Vermont; son Brian, his wife Janet, and children Allyson and Douglas of Boerne, Texas; and by his brother John A Young and his wife Joy of Shreveport, Louisiana as well as many nieces and nephews.
Albion's family is grateful to his friends and neighbors, and the Wellman community for their caring support, and to the many kind and caring people at Pleasantview Home in Kalona, and the Iowa City Hospice staff members that made his final days comfortable and peaceful.
Albion was blessed with a life well lived. He will be dearly missed and his memory cherished by many.
A visitation will be held from 10:00 am - 2:00 pm on Monday, January 24, 2022, at the Powell Funeral Home in Wellman. A graveside memorial gathering will be planned when Covid allows, likely in June. In lieu of flowers, donations may be made to the Asbury United Methodist Church and Planned Parenthood. The Powell Funeral Home is caring for Albion and his family.

To order memorial trees or send flowers to the family in memory of Albion J. Young, please visit our flower store.