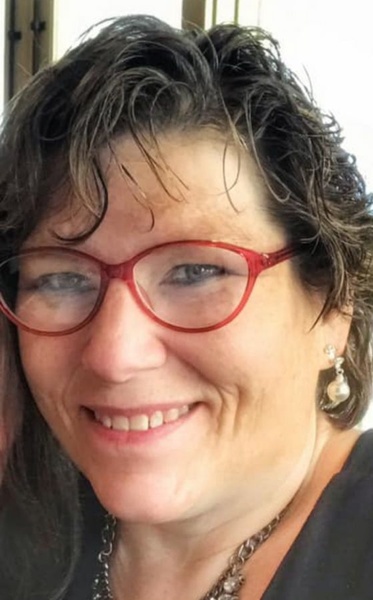 AINSWORTH-Angela M. Nicholson, age 47, died Thursday, March 12, 2020, at her home.
Angela was born December 7, 1972, in Sigourney, to Raymond Johnson, Jr. and Shirley (Yaeger) Johnson Conkity and was later adopted by Wayne Conkity. She graduated from Keota High School in 1991. On November 18, 1995, she married Toby Freese in Ely, Iowa. They were later divorced. She then married Darryl Nicholson in Washington on June 24, 2017. Angela lived in Cedar Rapids, Iowa City and Tennessee before moving to Ainsworth. She had worked at the University of Iowa in the clerical department since September of 2018. Angela was a member of the Deep River Auxiliary, was involved in the Relay for Life, fund-raised for Above and Beyond Cancer and served on a Make-A-Wish committee.
Survivors include her husband: Darryl of Ainsworth; step-son: Darrian Nicholson of Burlington; step-grandchild: Denver Nicholson; her parents: Wayne and Shirley Conkity of Harper; two brothers: Jeremy (Maude) Conkity of Plano and Clinton (Kristy) Conkity of Cedar Falls; several nieces, nephews, great nieces and great nephews. She was preceded in death by her biological father and her ex husband.

A memorial fund has been established for Washington County Relay for Life or Iowa City Hospice. Powell Funeral Home and Cremation Service in Keota is caring for Angela and her family. Tributes may be made at www.powellfuneralhomes.com.

To order memorial trees or send flowers to the family in memory of Angela M. Nicholson, please visit our flower store.