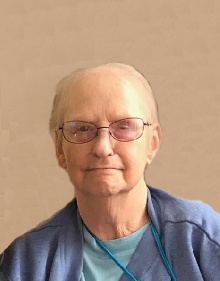 KEOTA-Barbara Lou Ann Greiner, age 78, of Keota, died Sunday, June 27, 2021, at the Keokuk County Health Center in Sigourney.
Barbara was born December 3, 1942, in Iowa City, to Robert and Agnes (Solnar) Irving and graduated from Regina High School. On August 21, 1965, she married Kenneth Greiner at St. Wenceslaus Catholic Church in Iowa City. The couple lived and farmed in the Talleyrand area following marriage. Barbara also worked in the Nutrition Department and as a Surgical Assistant at University of Iowa Hospitals, worked at Adventureland Video and was a Nurses' Aide and did laundry at Maplewood Manor in Keota, retiring in 1997. She was a member of Ss. Peter & Paul Catholic Church, where she served on the Parish Council, and later Holy Trinity Parish. Barbara enjoyed flowers, gardening, movies, reading, collecting things and her grandchildren.
Survivors include her husband: Kenneth of Keota; six children: Robert Greiner of Keota, Joseph (Brenda Walker) Greiner of Wellman, Cindy (Brian) Culich of Des Moines, Brian (Shannon) Greiner of Keota, Michelle (Todd) Swearingen of Hedrick and Melissa (Robin Maras) Greiner of Riverside; 19 grandchildren; one great grandchild on the way; two brothers: Kenneth Irving of Iowa City and Jerome Irving of Iowa City and one sister: Delores Grauer of Iowa City. She was preceded in death by her parents and one brother: James Irving.

Funeral mass will be held at 11:00 a.m. on Friday, July 2, 2021, at Holy Trinity Parish - St. Mary Catholic Church in Keota, with Revs. Robert Lathrop and Charles Fladung officiating. The service will also be livestreamed on the Powell Funeral Home facebook page. Burial will be at Holy Trinity Cemeteries - Ss. Peter & Paul Cemetery. Visitation will be from 9:00 a.m. until 11:00 a.m. on Friday at the church.

A memorial fund has been established for the Keota QRS, Wilson Memorial Library or Clear Creek Heritage Association. Powell Funeral Home and Cremation Service in Keota is caring for Barbara and her family. Tributes may be made at www.powellfuneralhomes.com.

To order memorial trees or send flowers to the family in memory of Barbara Greiner, please visit our flower store.