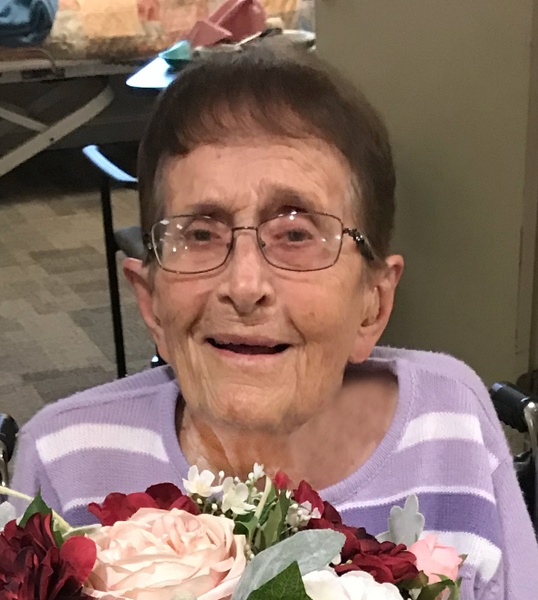 KESWICK-Bernadine Hervey, age 97, of Keswick, went to be with her Lord and Savior on Saturday, August 13, 2022, at the Manor House Care Center in Sigourney.

Ruby Bernadine (Taylor) Hervey was born April 27, 1925, north of Keswick in Iowa County, the daughter of William Henry (Bill) and Mable Lee (Wyant) Taylor.  She attended country school and later graduated from Keswick High School in 1942.  She attended Central College in Pella for one year.  This allowed her to teach in the country school.  She later graduated from William Penn College in Oskaloosa, majoring in Elementary Education and Physical Education.  On June 28, 1945, she married Lloyd Hervey at the Keswick Methodist Church.  They became the parents of three daughters, Barb, Bonnie and Betsy.  They lived on the Hervey home place northeast of Keswick for 71 years.  Bernadine remained there following Lloyd’s passing in 2016.  Later she resided at Manor House Care Center in Sigourney.  She taught school for 30 years, beginning in the country school and retiring from Tri-County Community Schools in 1991.  She received the Lord as her Savior in early childhood and was a member of the Keswick Methodist Church.  She served her church teaching young people and junior high Sunday School classes, served on the church board and was evangelism chairman for 15 years.  She was one of the three ladies who organized the Keswick Garden Club.  This group established the Keswick Park.  As a county 4-H leader in Entomology, Forestry and plants, many of her 4-H members went to the Nationals in Chicago.  At Expo, she served as small animal superintendent developing new divisions so children living in town could participate in 4-H.  She was Food Supervisor for three years at Manor House Care Center in Sigourney.  After she retired from teaching, she organized the Tri-County Community School retired employees organization.  Bernadine was also a member of the Keokuk County Historical Society.  When a member, she organized the Keswick High School Alumni pictures that are on display at the museum.  Among her greatest joys were her three grandchildren: twin granddaughters, Taylor and Bailey and grandson Bret Barnett.  She thoroughly enjoyed watching them play softball, basketball and baseball.  She leaves special friends: Betty Rumer and Terry and Donna Bair, who spent many hours helping her.

Survivors include three daughters: Barb Hervey of Clive, Bonnie Hervey of Osceola and Betsy (Jamie) Barnett of Indianola; three grandchildren: Taylor Barnett of Knoxville, Bailey (Isaac) Short of Pella and Bret Barnett of Indianola; a great granddaughter Myla Short (aka: “her dolly”); one sister-in-law Marie Taylor of Oxford; six nephews and three nieces.  She was preceded in death by her parents; husband Lloyd in 2016 and adopted brother John in 1978.

Funeral service will be held at 10:00 a.m. on Thursday, August 18, 2022, at the Keswick Methodist Church, with Pastor Brandi Meyer officiating.  The service will also be livestreamed on the Powell Funeral Home Facebook page.  Burial will be at Sixteen Cemetery near Thornburg.  Visitation will be from 4:00 p.m. until 7:00 p.m. on Wednesday, August 17, 2022, at Powell Funeral Home in North English.

In lieu of flowers, memorials are preferred to the Keswick Fire Department or the Keswick Methodist Church.  Powell Funeral Home and Cremation Service in North English is caring for Bernadine and her family.  Tributes may be made at www.powellfuneralhomes.com.

To order memorial trees or send flowers to the family in memory of Bernadine Hervey, please visit our flower store.

The service will also be livestreamed