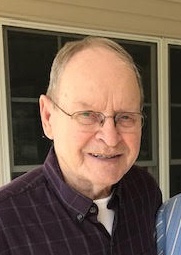 Williamsburg- Bernard Dean Flugum, was born November 12, 1931 at the family home near Leland, Iowa, the son of Clarence Dean and Myrtle (Monson) Flugum. He was baptized and confirmed at Winnebago Lutheran Church in Lake Mills, Iowa. He grew up on the family farm and greatly enjoyed caring for the farm animals. Bernard attended rural school thru 8th grade and graduated from Forest City High School, class of 1949. Six months later he enlisted in the United States Air Force as military police, serving some time in Africa, Texas, Kansas and Georgia. After his service, he graduated from Waldorf College in Forest City, Iowa. Bernard worked at Cool Spring Canning Company, in Lake Mills where he met his future wife. On June 15, 1957 Bernard was united in marriage to Arlene S. Anderson. He worked for Streater Inc. in Albert Lea, MN for over 35 years. They owned an acreage in Emmons, MN where he enjoyed raising horses, sheep and golden retrievers. He went on many fishing trips to Minnesota and Canada with his family. He also enjoyed vacations to Colorado, Alaska and Arizona. Most of all he enjoyed spending time with his family, grandchildren and great grandchildren. Bernard passed away to his home in Heaven, on Wednesday, January 15, 2020 at the University of Iowa Hospitals and Clinics in Iowa City, at the age of 88 years.

The family wishes to thank the medical staff at the University of Iowa Hospitals, the English Valley Care Center and Rev. Karl Heck for all of their caring and kindness at this time.

In lieu of flowers, memorials may be given to the Alzheimer's Association. Messages and tributes may be left at www.powellfuneralhomes.com

To order memorial trees or send flowers to the family in memory of Bernard Dean Flugum, please visit our flower store.