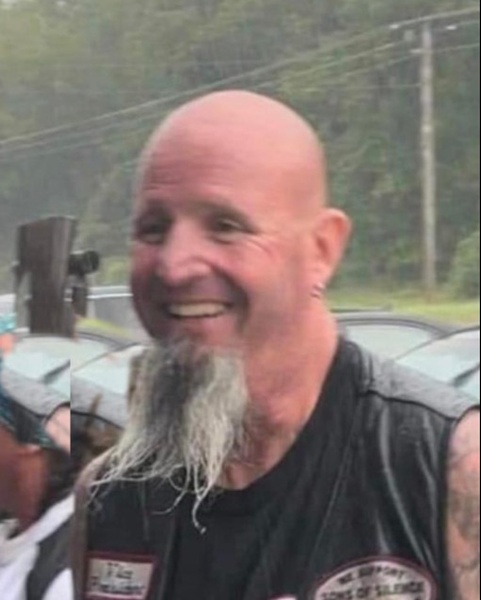 Williamsburg-William (Bill) Houlihan was born September 3, 1971, in Tucson, AZ, the son of Raymond Douglas and Ruth Ann (Champlin) Houlihan. He grew up in Shepherd, MI attending Shepherd High School, where he enjoyed participating in football and wrestling. He enlisted in the United States Army Reserve at the age of 17, and was honorably discharged at the end of his service. Bill was united in marriage to the love of his life, Tammy Ann Adrianse on May 3, 1996 at Isabella County Court House in Mt. Pleasant, MI.  Bill worked as a Welder in many industries over the years, with the most recent being at Kinze Manufacturing in Williamsburg, IA as a robotic team leader. Over the years he shared his passion for welding with many students, from mentoring FFA and 4H kids to training on the job. He was a member of the Defiant Souls Motorcycle Club, as a leader and best friend to all of his Brothers. Bill lived a rich life full of love, never met a stranger, always offering the “good whiskey” to anyone that needed it. He was the first to offer help, but the last to go home when a job needed to be done. At the end of his day he always went home to his Tammy Ann and loyal doggos. He was a genuine person that was always a shoulder to cry on, would hold your hand when you were scared, and had a hug for those who needed it. He was a giant among men and will forever leave his mark on this life. Bill passed away on Monday, September 26, 2022, at the University of Iowa Hospital at the age of 51 years surrounded by his beautiful bride and two daughters.

Celebration of Life Gathering will be held at 1:00 to 3:00 pm on Saturday, October 1, 2022, at Hilton Hall in Conroy. A visitation will be held from 4:00 pm until 7:00 pm Friday, September 30, 2022 at Powell Funeral Home in Williamsburg. A private family burial with military rites will be held Saturday morning. A  memorial fund has been established for Muscatine VFW.  Powell Funeral Home in Williamsburg is caring for Bill and his family. Messages and tributes may be sent to the family at www.powellfuneralhomes.com

To order memorial trees or send flowers to the family in memory of Bill Houlihan, please visit our flower store.