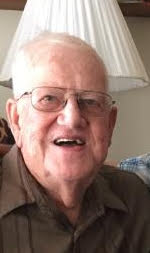 Bob was born July 28, 1928 in Monroe County, Iowa to Harry Melville and Ida Mae (Lucas) Stump. He attended school in Albia, Conrad-Grundy Center, and Danville. Bob left school after his sophomore year and later received his GED when his own children were in high school. Bob served his country as a Technician Fifth Grade from May 31, 1946 to October 23, 1947 during the Korean Conflict. Bob received a World War II Victory Medal and Army of Occupation Medal, Japan.
Bob was united in marriage to Patricia Ann VerPloegh on October 16, 1949 at the Methodist Church in Albia. After their marriage they lived in Ogden, Albia, Lovilla and Carlisle while raising their 3 children. After Patricia's death Bob moved to Valley View Assisted Living at North English in 2013.
After Bob and Pat were married, Bob worked as a Projectionist at the Ogden Theater from 1948 - 1951. Bob then worked as a slitter for Frye Copy System in Des Moines for 30+of years retiring in 1992. Bob was an active member in the United Paperworkers International. Bob was a hard worker always holding down his main job and having second jobs in the evenings. While living in Carlsile, Bob was an active member of the Carlisle United Methodist Church. He enjoyed volunteering in the Kids Hope Program and making horseshoe nail crosses for the many mission trips. He joined the North English Christian Church, Disciples of Christ after moving to North English. Bob enjoyed the warm welcome and many friends he made until he was physically unable to attend.

Bob was preceded in death by his parents, wife, son Robert (1/7/19) , daughter in law Sanda, Brothers: Charles and Harold and sisters:Margaret Jane, Dorothy, and Rosemary.

No visitation or services are scheduled at this time. A memorial service will be held at a later date.

To order memorial trees or send flowers to the family in memory of Bobby H Stump, please visit our flower store.