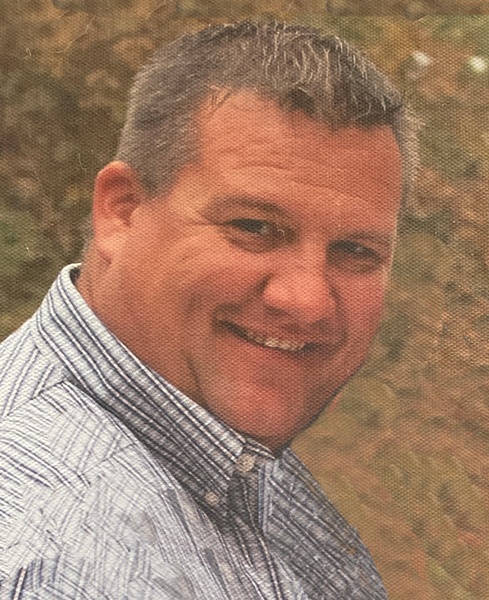 Marengo- Brent Allen Strasser was born February 5, 1978 in Marengo, Iowa, the son of Roger Allen and Annette Kay (Moennich) Strasser. He was baptized February 26, 1978 and confirmed April 12, 1992 at St. John Lutheran Church, Homestead. He graduated from Williamsburg High School in 1996. On March 14, 2015 Brent was united in marriage to Carrie Ann Noe at St. John Lutheran Church, Homestead. He owned and operated Strasser Trucking. After graduation, his passion for the wheat harvest took him to Kansas. His nickname Strapper came from his early start in trucking with R.H. Hummer. Brent's dedication to his love of cattle and trucking led him to be a part of an Iowa convoy delivering hay and supplies to Kansas farmers who suffered major loss during the 2017 fires.
He also enjoyed coffee with the guys and spending time with his family. Brent looked forward to and enjoyed his annual fishing trip to Lake Erie with friends. Brent will always be remembered for his sense of humor and rarely did a song come on the radio that he didn't know the words to.
Brent was a lifelong member of St. John Lutheran Church. Brent died on Monday, October 4, 2021 at the University of Iowa Hospitals in Iowa City at the age of 43 years.

He is survived by his wife Carrie of Marengo; three sons, Austin Papini of Des Moines and Cody Strasser and Jaxson Strasser both of Marengo; mother Annette of Parnell; five siblings, Kim (Jim) Sweet of Atkins, Cory (Brooke) Strasser of Chelsea, Brian (Vicki) Strasser of Homestead, Brad Strasser of Parnell and Rebecca Strasser of North Liberty; numerous nieces and nephews; mother-in-law, Ann Noe of Marshalltown and two sisters-in-law, Cathy (fiancé Dave Stock)Noe of Clive and Carolyn (Matt) Hala of Marshalltown. He was preceded by his father Roger Strasser and his father-in-law Floyd Noe.

Celebration Of Life Service will be held 10:30 am on Monday, October 11, 2021 at St. John Lutheran Church, near Homestead. Burial will be in the St. John Lutheran Cemetery. Visitation will be Sunday from 3:00 -7:00 pm at Powell Funeral Home in Williamsburg. In lieu of flowers, a general memorial fund has been established. Messages and tributes may be left at www.powellfuneralhomes.com.

To order memorial trees or send flowers to the family in memory of Brent Allen Strasser, please visit our flower store.