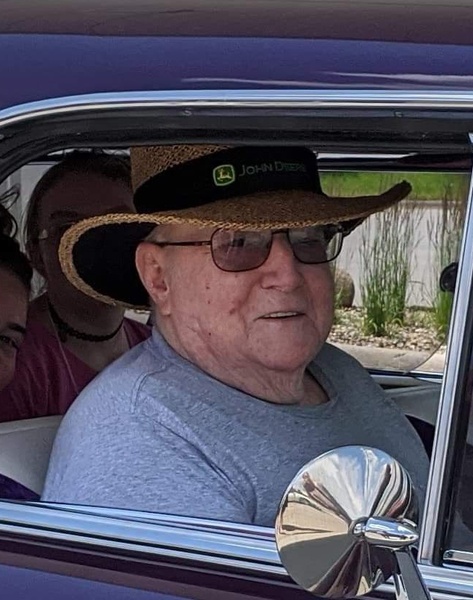 NORTH ENGLISH-Charles L. Middlekauff, age 83, of North English, died Monday, January 31, 2022, at the English Valley Care Center.
Charles was born January 20, 1939, in North English, to John and Opal (Shaull) Middlekauff and received his education in Millersburg Schools. In April of 1962, he married Viola Hodgson and they were later divorced. A lifelong resident of the Millersburg and North English communities, Charles worked at Alfred Shaull Implement 10 years, Strohman Implement in North English 9 years and English Valley Schools for 13 years as a mechanic, part-time custodian and bus driver, retiring in 2001. Charles was a member of the United Methodist Church and enjoyed fishing and hunting
Survivors include three daughters: Crystal Fetter of North English, Linda (Harvey Gesling) Worrall of Cedar Rapids and Connie (Tim) McMillan of Parnell; 10 grandchildren; 17 great grandchildren; one great great grandson; two sisters: Janice (Chuck) Garringer of Conroy and Joan (Larry) Strasser of South English and numerous nieces and nephews. He was preceded in death by his parents and brother: Norman Middlekauff.

Celebration of Life Memorial Service will be held at 10:30 a.m. on Thursday, February 3, 2022, at Powell Funeral Home in North English. Private family burial will be at Millersburg Cemetery. Visitation will be from 9:30 a.m. until service time on Thursday at the funeral home.

A memorial fund has been established for Essence of Life Hospice. Powell Funeral Home and Cremation Service in North English is caring for Charles and his family. Tributes may be made at www.powellfuneralhomes.com.

To order memorial trees or send flowers to the family in memory of Charles Middlekauff, please visit our flower store.