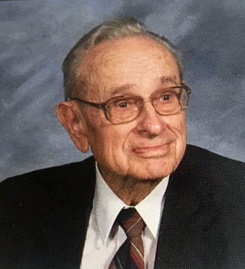 Clayton Earl Gingerich was born on May 7, 1927, near Kalona, Iowa. He was the son of Amos J. and Nannie (Yoder) Gingerich, and was the youngest of ten children. The family moved to Versailles, Missouri before he was a year old, then to Hesston, Kansas when he was six years old, and back to Iowa County, Iowa when he was twelve. Clayton attended Parnell High School and Hesston High School, and he graduated from Eastern Mennonite High School. He was baptized and became a member of West Union Mennonite Church in 1941. Soon after high school, Clayton was drafted and sent to a Civilian Public Service camp in Fort Collins, Colorado. After ten months he was transferred to Mulberry, Florida, and later to La Plata, Puerto Rico for two years.

Clayton was united in marriage with Eileen Mae Conrad of Smithville, Ohio on June 8, 1952, and they had five children together. Eileen passed away from an extended illness on January 27, 1970. Clayton married Myrtle Hamilton of Harper, Kansas on December 25, 1971. They moved to the Pleasantview Home community in Kalona, Iowa in 2006 as Myrtle's health was declining. Myrtle passed away on April 13, 2007.

Clayton graduated from Goshen College in 1951 with a degree in Spanish. After graduation he taught two years at Western Mennonite School (Salem, Oregon), and two years at Iowa Mennonite School (Kalona, Iowa). He then farmed his father's farm near Holbrook for five years until 1960. He subsequently earned an M.A. in Spanish Education from Arizona State University, and taught Spanish at La Junta High School in La Junta, Colorado for 27 years. He was an active member of Emmanuel Mennonite Church in La Junta, teaching Sunday school for Spanish speaking members.

After retiring from teaching in 1994, Clayton and Myrtle moved to Mountain Home, Arkansas. They spent several months each winter in south Texas, Alabama, and northern Florida, where Clayton enjoyed fishing, writing, and collecting seashells. He had a life-long curiosity for learning and travel, and encouraged this with each of his children.

Clayton died on January 19, 2020, at Pleasantview Home in Kalona. He was 92 years old. Clayton is survived by his brother Simon of Goshen, Indiana as well as by his five children: Ron of Lanai, Hawaii; Sharon (Ron) Hawkins of Saratoga, Wyoming; Tom of Reno, Nevada; Karla (Scott) of Fort Collins, Colorado; and Karen of Kansas City, Missouri; 4 grandchildren and 9 great grandchildren. He is preceded in death by his parents, spouses, five brothers (Leroy, Fred, Truman, Orie, and Paul), and three sisters (Charity Troyer, Eunice Histand, and Lois Bender).

Visitation will begin at 9:30 a.m. on Wednesday, January 22, 2020 at the Yoder-Powell Funeral Home in Kalona with a Memorial Service beginning at 11:00 a.m. Clayton will be buried at a later service at the Fairview Cemetery in La Junta, Colorado, alongside Eileen and Myrtle. Memorial donations may be made to Pleasantview Home in Kalona, Iowa, or to Mennonite Central Committee's Puerto Rico disaster relief fund.

To order memorial trees or send flowers to the family in memory of Clayton E. Gingerich, please visit our flower store.