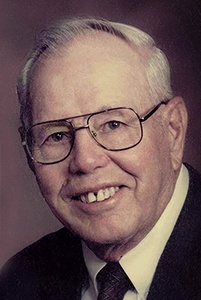 Williamsburg- Clifford Leroy Smothers, son of Emmett and Laura Cox Smothers, was born on May 27, 1923 near Kinross, Iowa. Clifford's family later moved to rural North English, where he attended North English High School. Clifford served in the United States Army, 1884th Engineer Aviation Battelion from 1943 to 1946. He served overseas in Peleliu, Guam, and was in Okinawa when WWII ended. Upon returning from overseas, Clifford began dating Marvel Septer. During this time, Clifford and Marvel attended and were greatly impacted by Parkview Church, then located in Coralville, Iowa, where they both came to know Christ as their Savior. Clifford was united in marriage to Marvel on August 9, 1947 at Pleasant Grove Grace Brethren Church. They farmed for a number of years in rural Keokuk and rural Iowa County. In March of 1965, they moved west of Millersburg and farmed there until retirement. Clifford was employed by Kinze Manufacturing in Williamsburg from 1985 to 2006. Marvel and Clifford moved to Highland Ridge Senior Living Community in Williamsburg, in January, 2013. Clifford died on June 1, 2020, at Highland Ridge Care Center.

Clifford was a loving, dedicated husband, father and grandfather. His family, grandchildren and great-grandchildren were the joy of his life. He was a constant pillar of support, always willing to lend a listening ear, and he prayed for his family daily. Clifford left a legacy of cherished memories and he will be greatly missed.

Clifford's family would like to thank Highland Ridge and staff for all of their care and support throughout Clifford's stay.

Celebration of Life services will be held 10:30 a.m. Friday, June 5, 2020, at Powell Funeral Home in North English. Charlie Carter will officiate. Burial will be in the North English Cemetery. Visitation will be Friday, from 9:00 a.m. until service time.

Messages and tributes may be left at www.powellfuneralhomes.com

To order memorial trees or send flowers to the family in memory of Clifford Leroy Smothers, please visit our flower store.