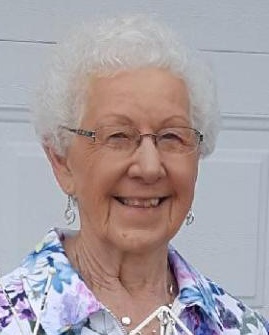 Williamsburg-Darlene Fern Read was born March 21, 1936 in Hilton Township, Iowa County, Iowa. The daughter of August Herman and Erna Anna (Sandersfeld) Maas. She was baptized on April 19, 1936 and confirmed May 28, 1950 at Immanuel Lutheran Church. She received her Christian education at Immanuel Lutheran School and graduated from Williamsburg High School n 1954. Darlene was united in marriage to LeRoy Weiss on August 14, 1955 at Immanuel Lutheran Church near Williamsburg. To this union they were blessed with five children. They lived and farmed near Victor. LeRoy died in 1994. She moved to Williamsburg in 1996. Darlene later was married to Emmanuel "Mac" Read on April 26, 2003. He died in 2005. She was a homemaker and worked at Colony Village as a waitress for 20 years. She was a former member of St. John's Lutheran Church rural Victor and a member of St. Paul Lutheran Church in Williamsburg. She was very active in the church and the LWML. She enjoyed playing cards, bowling, reading and traveling, but above all enjoyed and loved her families. Darlene died Sunday, October 13, 2019 at Compass Memorial Hospital in Marengo at the age of 83 years.

Celebration of Life Service will be 10:30 am on Thursday, October 17, 2019 at St. Paul Lutheran Church in Williamsburg. Burial will be at St. John Lutheran Cemetery near Victor. Visitation will be Wednesday from 4:00 to 7:00 pm at the Powell Funeral Home in Williamsburg. In lieu of flowers memorials may be directed to Lutheran Interparish School in Williamsburg, Lutheran Hour or Lutheran Indian Ministries. Messages and tributes may be left at www.powellfuneralhomes.com.

To order memorial trees or send flowers to the family in memory of Darlene Fern Read, please visit our flower store.