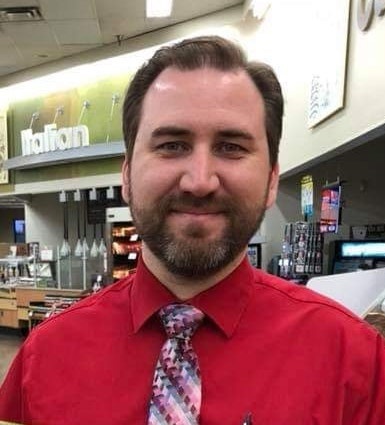 North English- Donald E Burdick was born April 6, 1974, in Waterloo, Iowa. He was the son of Douglas Leroy and Carolyn June (Vachet) Burdick. Don graduated from Cedar Falls High School in 1992. He attended the University of Northern Iowa, graduating in 2005 with a Bachelor of Arts degree in Marketing. Donald met his wife (Carrie Anne Shinkle) on a blind date in 1998. On October 20, 2000, Don and Carrie were united in marriage at St. Patrick's Catholic Church in Cedar Falls. Don was the Meat/Seafood Manager at Oskaloosa Hy-Vee, and before that the HR/Accounting Manager. Don enjoyed spending time with his family, especially introducing his children to the classics like Star Wars, the Beatles and the Muppets. He also enjoyed drawing, working on computers, and bike riding.
Don died on Wednesday, February 19, 2020, near Sigourney, Iowa at the age of 45 years.
Don was a cherished husband, father, son, and friend, who will be sadly missed. He is survived by his wife Carrie and their children Keegan and Davis all of North English; his mother Carolyn Burdick; sister Kelly Burdick both of Cedar Falls; two uncles, Bob Vachet of Crystal Falls, Michigan and Marty Burdick of Waterloo; father and mother-in-law Paul and Gale Shinkle of Cedar Falls; and a sister-in-law Marie Shinkle of Iowa City. He was preceded in death by his father Douglas Burdick.

Visitation will be held from 3:00 - 7:00 pm on Tuesday, March 3, 2020, with a Celebration of Life Service to follow at 7:00 pm at the Powell Funeral Home in North English. A general memorial fund has been established. Messages and tributes may be left at www.powellfuneralhomes.com

To order memorial trees or send flowers to the family in memory of Don Burdick, please visit our flower store.