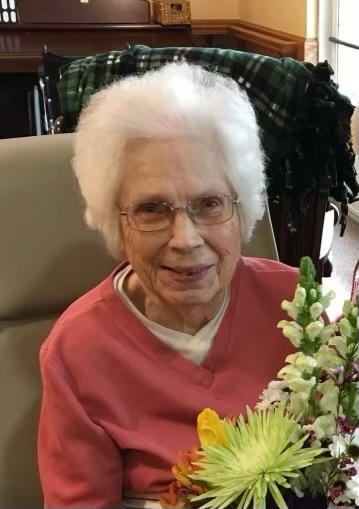 Williamsburg-Doris Rentsch, age 91, of Williamsburg passed away peacefully at the Highland Ridge Care Center on December 12th. Doris was a long-time resident of rural Webb, IA where she and her late husband, Richard, cared for their family farm.
Originally from Lee's Summit, MO, Doris moved to Iowa when she married Richard in 1959. Prior to marriage, Doris earned her Bachelor of Arts degree from the University of Kansas City, and worked for Hallmark and Bendix Corporations in Kansas City.
Richard and Doris enjoyed 52 years of marriage before he passed away in 2012. This union was blessed with 3 children - Walt, Karen and Bill. Doris enjoyed sewing, gardening, baking, and her daily crossword puzzle. She was very active in her church, First United Church of Sioux Rapids, for many years. She also had a great love for public libraries, especially the Sioux Rapids Library.
Doris's life will be honored by her family which includes her sister Helen McCall; children Walt (Teresa) Rentsch, Karen (Scott) Roe; grandchildren Adam (Melissa) Rentsch, Sarah Rentsch, Hannah Rentsch, Kayla (Robert) Slack, Sarah (Justin) Odom, Jenna (Thomas) Bradley, Jaret (April) Roe, Emily Rentsch, Abigail Rentsch; great grandchildren Aiden, Alek, Rylan, and Anya; nieces, nephews , friends; and family support from Jennifer and Ben Gehrke, and the "boys" Greg and David Hermstad.
Doris was preceded in death by her parents Leo and Frances McCall, husband Richard, son Bill, brother and sister-in-laws Richard and Arlene Lashier and Lynn and Betty Fitsimmons.
The family would like to extend a special thank you to the staff of Essence of Life Hospice and the Highland Ridge Care Center for their compassionate care. Their kindness and Grace that was shown towards Doris will always be remembered.

To order memorial trees or send flowers to the family in memory of Doris L. Rentsch, please visit our flower store.