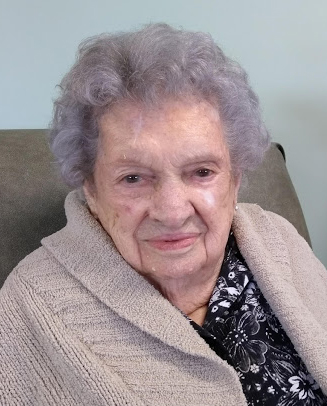 Webster- Dorothy Lorraine Barker a daughter of Charles Melburn and Daisy Hill Barker was born near Millersburg, Iowa on July 27, 1915. She passed away on Saturday, March 30, 2019 at the English Valley Care Center, at the age of 103 years.

She was one of a family of six children. Dorothy attended and graduated from Millersburg Consolidated Schools and attended Parsons College in Fairfield, Iowa for two years and taught rural school in Iowa County for two years.

She was married to George Lyman Sorden Sr. in San Diego, California on June 15, 1936. They became the parents of two children, Donna Lee and George Lyman, Jr (Bud).

The family returned to Webster, Iowa in 1939 where except for a year during WWII, when they lived in Albuquerque, they spent their lives, until 2009 when Dorothy moved to Valley View Assisted Living in North English, then to English Valley Care Center in 2014.

Outside of her family and home, her greatest joy was gardening and caring for her flowers. She loved to share her flowers and she was happiest when she was "digging in the dirt." She shared her husband's liking to fish and spent many happy times on the lake in Canada.

Celebration of Life Service will be held 10:30 am on Tuesday, April 2, 2019 at the Webster United Methodist Church in Webster. Rev. Dr. Charles Klink will officiate. Burial will be in the Sorden Cemetery near Webster. Visitation will be on Monday, from 4:00 - 7:00 pm at the Powell Funeral Home in North English. Memorials are for the Webster United Methodist Church. Messages and tributes may be left at www.powellfuneralhomes.com

To order memorial trees or send flowers to the family in memory of Dorothy Lorraine Sorden, please visit our flower store.