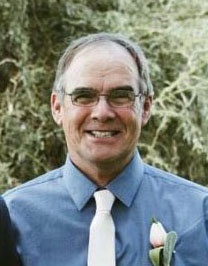 WELLMAN - Douglas Patrick Stein was born October 16, 1952 in Fort Dodge, Iowa, the son of Curtis and Betty (Huseby) Stein. He graduated from Gilmore City High School in 1971. On June 7, 1980 Doug was united in marriage to Vicki Seitsinger at the Kinross Christian Church in Kinross. Doug enjoyed farming, starting at an early age helping his dad in the field and continued throughout his lifetime. They have lived and farmed in the Wellman community for 39 years, moving there shortly after their marriage. He was a member of the Albert City Threshermen and Collectors Show. He enjoyed antique tractors especially "Ageless Iron" and "red power". Doug passed away at his home on Sunday, October 20, 2019, surrounded by his family at the age of 67 years old after a hard fought 3 year battle with kidney cancer.
Doug is survived by his wife Vicki of Wellman; 3 sons: Jeffrey Stein (Katlyn) of Wellman, Andrew Stein (Alicia) of Ankeny, Grant (Karissa) Stein of Eagle Grove along with grandchildren Robert, and Elena; his mother Betty Stein of Gilmore City; 3 brothers: Ron (Esther) Stein of Woolstock, Rick (Lori) Stein of Humboldt, Terry Stein of Gilmore City;
2 sisters: Suzi Jergens of Humboldt, Cindy (Dave) Vote of Gilmore City; an uncle, several aunts, and numerous nieces, nephews and cousins. He was preceded in death by his father Curt Stein, and 2 brothers: Paul Stein and Jim Stein; and a father and mother-in-law Harold and Vivian Seitsinger.
Funeral Services will be held at 10:30 AM Friday, October 25, 2019 at the Kinross Christian Church in Kinross. Pastor Luke Caster will officiate. Burial will be in the Brethren Cemetery in rural South English. Visitation will be held from 4-8 PM on Thursday, October 24, 2019 at the Powell Funeral Home in Wellman. A memorial fund has been established for Albert City Threshermen and Collectors, and Washington County Hospice or donors choice. The Powell Funeral Home in Wellman is caring for Doug and his family. www.powellfuneralhomes.com

To order memorial trees or send flowers to the family in memory of Douglas Stein, please visit our flower store.