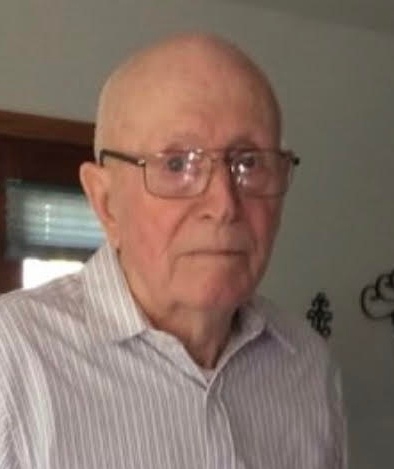 North English- Edward Levern Martin was born April 10, 1935 in Green Township, Iowa County, Iowa, the son of Emerson Glen and Alta Rosemond (Singleton) Martin. He attended country school and Wellman High School. Ed enlisted in the US Army, joined the 82nd Airborne and was a paratrooper during the Korean Conflict. After serving his country he purchased a mail-order commercial fishing boat and worked in Ketchikan, Alaska for the next year.
On January 21, 1961 Ed was united in marriage to Lola Sylvia Morrison in Wellman, Iowa. In the early years of their marriage Ed drove heavy machinery to construct much of I-80 across Iowa and Illinois. He also helped his dad farm and later ran the family farm north of Wellman until 1984 when it was destroyed by a tornado. After leaving the farm they lived in Missouri, Oskaloosa and North Liberty before retiring in North English. He also worked in carpentry and construction for many years. Ed was a member of the North English Christian Church. He enjoyed spend time with his grandchildren, traveling, mission trips, going to the cabin they built in Wisconsin and fishing.
Ed died peacefully in his sleep on Monday, May 17, 2021 at the English Valley Care Center in North English at the age of 86 years.

Celebration of Life Service will be held 10:30 am on Thursday, May 20, 2021 at Powell Funeral Home in North English. Burial will be in the McArtor Cemetery near Wellman. Visitation will be on Wednesday from 4:00 - 7:00 pm at the Powell Funeral Home in North English. A general memorial fund has been established. Messages and tributes may be left at www.powellfuneralhomes.com

To order memorial trees or send flowers to the family in memory of Edward Levern Martin, please visit our flower store.