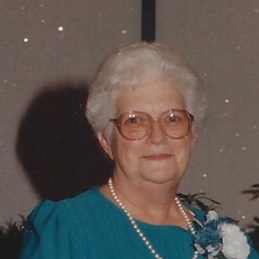 Williamsburg - Eleanor Dietrich Wyant was born November 17, 1928, near Williamsburg, the daughter of Gordon and Blanche (Bell) Tompkins. She attended rural school and graduated from Marengo High School in 1947. Eleanor was united in marriage to Leroy E. Dietrich on September 25, 1947. To this union they were blessed with nine children. He died on March 8, 1989. On October 12, 1991, she was married to Gerald Wyant. He died on June 1, 2010. She was a member of the former Cornerstone Evangelical Free Church near Williamsburg. Eleanor was a homemaker and avid gardener. After raising her children she enjoyed doing ceramics and continued to crochet many baby Afghans for her family and friends. Eleanor passed away Saturday, January 5, 2019 at the English Valley Care Center in North English at the age of 90.

Celebration of Life Service will be 10:30 am on Friday, January 11, 2019 at the Harvest Baptist Church in Williamsburg. Visitation will be Thursday from 4:00 to 7:00 pm at the Powell Funeral Home in Williamsburg. Burial is at Pilot Grove Cemetery near Williamsburg. Memorial are for Essence of Life Hospice. Messages and tributes may be left at www.powellfuneralhomes.com.

To order memorial trees or send flowers to the family in memory of Eleanor Dietrich Wyant, please visit our flower store.