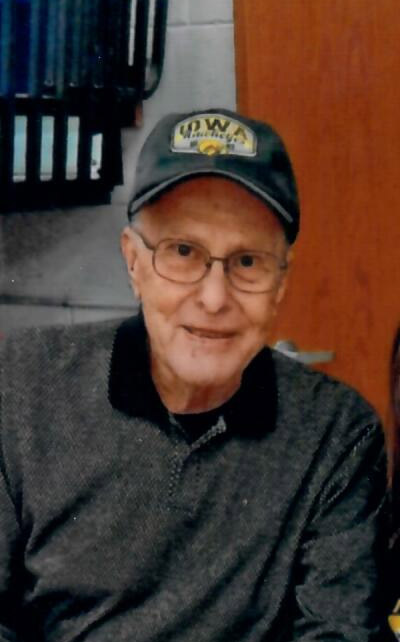 North English- Eugene (Gene) Hall Denison died April 4, 2019 at the English Valley Care Center in North English, after a long battle with cancer. He was born April 18, 1935 to Earl & Maud (Hall) Denison near North English, Iowa. Gene attended Hinkletown School from K-3rd grades. When the family moved to North English in 1944, he attended the North English Public Schools and graduated in 1953. He loved sports and participated in basketball, baseball, football and track. Later in life, golf was his passion.
Gene worked at Johnsons Locker for 15 years, Denison Brothers Well-Drilling and Pump Repair as co-owner with his brother Wilford Denison for 5 years, Amana Refrigeration as an OEM sales rep for 12 years and the University of Iowa, as an area maintenance mechanic, retiring in 1977 after 20 years.
Gene was one of the original members of Knoll Ridge Country Club, serving as a president and board member. He served on the North English Fire Department and was an active member of the North English Jaycees. Gene was a member of the Boys and Girls Athletic Association as an official referee. He ran the scoreboard clock at E.V. Schools for over 50 years, as well as preparing for and officiating at many school sporting events. He loved to keep busy!
Gene was united in marriage to Patricia (Pat) Ann McNally at St. Joseph Catholic Church in North English on August 13, 1960. He enjoyed playing golf, helping out at the EV School and Knoll Ridge Country Club, helping friends with projects and most of all spending time with family and friends.

Celebration of Life Memorial Service will be held at 12:00 pm on Monday, April 8, 2019 at Gene's Gym- English Valleys High School in North English. Pastor Luke Caster and Al Ling will officiate. Visitation will be held on Monday prior to services from 9:00 am - 12:00 pm at gym. Memorials are for English Valleys Athletics, English Valleys Community Scholarship Foundation, the North English First Responders and Essence of Life Hospice. The family welcomes you to wear your favorite EV Bears or Iowa Hawkeyes apparel for Gene's services. Powell Funeral Home in North English is caring for Gene and his family. Messages and tributes may be left at www.powellfuneralhomes.com

To order memorial trees or send flowers to the family in memory of Eugene Hall Denison, please visit our flower store.