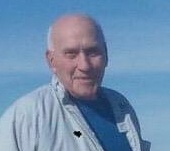 Williamsburg- Eugene “Bud” South was born was born June 12, 1931 in Audubon, Iowa, the son of Elmer Ernest and Cecile Mae (Parker) South.  He attended rural country school and graduated from Perry High School.  Bud was drafted to the United States Army and proudly served his country with active duty in the Korean War. He later was honorably discharged.  During his military service his family relocated from Perry to their farm northeast of Conroy.  Bud worked construction and farmed with his dad.  He later purchased an adjoining farm and raised livestock and crops.  He also worked at Williamsburg Ready Mix where he made life long friends.  Bud loved to dance, during one of those Saturday night dances he met a beautiful Irish woman named Eileen Finnegan from Parnell.  Bud and Eileen were united in marriage on April 25, 1959 at St. Joseph Catholic Church in Parnell.  To this union they were blessed with two children.  Eileen passed away on April 4, 1969 leaving Bud heartbroken and a widowed father of 2 young children.  With perseverance and determination, he raised his kids.  On May 5, 1995 his son Michael died.  Bud retired from farming and focused his energy on his beloved granddaughters.  Papa was adored by his granddaughters and provided them with life long fond memories.  He called his daughter and granddaughters every day and ended each call by saying “Papa loves you sweetheart, be careful, be safe.”  Bud was lucky to have wonderful friends that visited him often or called to check on him.  It meant the world to him and brightened his day.  He enjoyed hunting and collecting guns.  He was so proud of his gun collection and was always happy to show it off, in honor of his son Mike.  Bud was a member of St. Mary’s Catholic Church and the Iburg Poulson VFW Post #8797 in Williamsburg.  Bud passed away on Saturday May 21, 2022 at his home at the age of 90 years.

Funeral Mass will be 10:30 am on Wednesday, May 25, 2022 at St. Mary’s Catholic Church in Williamsburg.  Burial will be in St. Mary’s Catholic Cemetery.  Visitation will be Tuesday, from 4:00 to 7:00 pm at the Powell Funeral Home in Williamsburg.  A memorial fund has been established for Eastern Iowa Honor Flight, Stead Family Children’s Hospital or North English Community Center, Meals on Wheels Program.  Messages and tributes may be directed to www.powellfuneralhomes.com.

We would like to than the Iowa County Health Department for the care he received which allowed him to remain in his home. The North English Community Center for the daily meals.  His buddies for looking in on him and making him feel special. A heartfelt thank you to Jon Degen for your loyal support and friendship to Bud.  Thank you to the Iowa County Ambulance and Williamsburg Police Department for your assistance and compassion for Bud and his family. Finally, to the Powell Funeral Home for the tender care provided to Bud and his family.

We love you Papa-Rest in Peace; We miss you more than words can describe.

To order memorial trees or send flowers to the family in memory of Eugene "Bud" South, please visit our flower store.