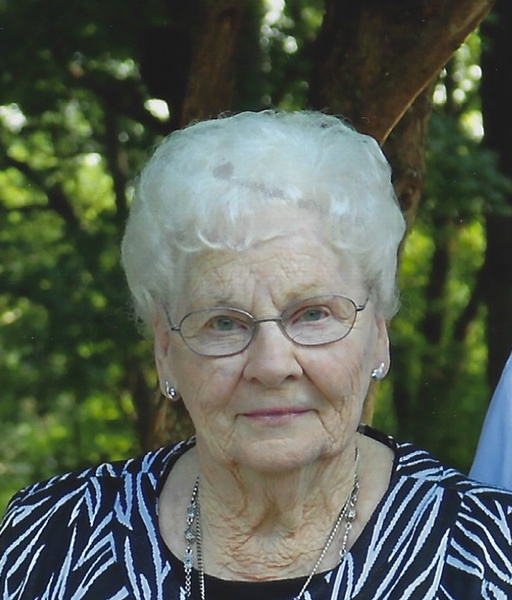 Keswick- Harriett Arva Denison was born July 9, 1927 northwest of Keswick, Iowa, the daughter of Orlando and Bessie Harriett (Reasoner) Edmundson. She graduated from Keswick High School in 1945. On May 19, 1945 Harriett was united in marriage to Gerald Wayne Denison in Keswick, they were married 69 years. She spent 50 years helping Gerald on the farm and taking care of their family. In 1993, they moved into the town of Keswick. Harriett was a member of the Keswick United Methodist Church and the Keswick UMW. She enjoyed cooking and spending time with her family. Harriett died on Monday, November 16, 2020 at the Sigourney Care Center at the age of 93 years.
She is survived by her children Ronald (Joy) Denison of Keswick and Rachelle (Gary) Morrison of Ottumwa; six grandchildren: Xan (Mike) Mooney, Jace (Courtney) Denison, Nick (Crystal) Morrison, Wade (Hannah) Morrison, Ward (Sabrina) Morrison and Wyatt (Kourtney) Morrison; thirteen great grandchildren: Alexa and Drake Mooney, Roya and Millie Denison, Jaden and Owen Morrison, Gunner and Jager Morrison, Ryker, Kinzley, Harlyn and Mavryk Morrison and Vera Morrison; and a special neighbor and friend Jane Feree . She was preceded by her parents, husband, three brothers: Dale, Wayne and Raymond Edmundson and two sisters: Dorothy Tadlock and Jessie Blaylock.
A private family service will be held at the Powell Funeral Home in North English. The funeral service will be live streamed on the Powell Funeral Home Facebook page. Burial will be in the Sixteen Cemetery, rural Thornburg. Visitation will be from 9:00 a.m. until 11:00 a.m. on Thursday, November 19, 2020 at Powell Funeral Home in North English. Masks are required and social distancing will be practiced. Memorials may be given to Keswick United Methodist Church or Keswick Fire and Rescue. Messages and tributes may be left at www.powellfuneralhomes.com

To order memorial trees or send flowers to the family in memory of Harriett Arva Denison, please visit our flower store.