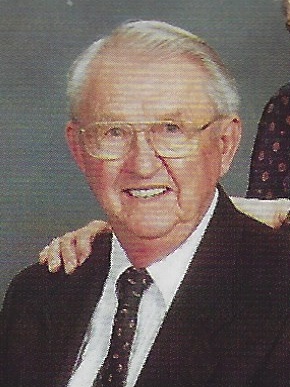 Williamsburg-Harvey William Von Ahsen was born August 17, 1924, in Iowa County, Iowa. The son of Herman and Ida (Maas) Von Ahsen. He attended Immanuel Lutheran School. He was attending Williamsburg High School when he was drafted into the service during his Junior year. Harvey served in the United States Army Air Core during WWII from April 1943 till March 1946. He served in England and Austria. In 1945 he met June at a dance in Penketh near Warrington, England. Harvey was united in marriage to June Page on Friday, December 13, 1946 at St. Paul Lutheran Church in Williamsburg. After their marriage he farmed 10 years, then worked for Wayne Kemp as a cabinet builder and became a realtor, and later started the development of Western Knolls, he started Iowa Mobile Concrete with his two sons Greg and Garth. Harvey enjoyed, traveling, going to Arizona, spending time in their Airstream, woodcarving, playing golf and dancing (they danced at Riverside Casino on Harvey's 90th birthday).
Harvey passed away on Friday, March 6, 2020 at the Highland Ridge Care Center in Williamsburg at the age of 95.

He is survived by his wife June of 73 years; two sons, Greg (Connie) Von Ahsen of North English and Garth (Vickie) Von Ahsen of Williamsburg; 5 grandchildren, Amanda (Marshall) Ritchie, Eva (Chris) Lutz, Jane (Brett) Van Zee, John Von Ahsen and Josh Von Ahsen; 11 great grandchildren; a brother Ivan (Alice) Von Ahsen of Cedar Rapids; two sisters, Edith Wille of Solon and Vera Spratt of Holbrook. He was preceded in death by his parents, two brothers, Merlin and Wilferd Von Ahsen, a sister Leona Smarsty and a granddaughter Anna Von Ahsen.
Celebration of Life Service will be 10:30 am at St. Paul Lutheran Church in Williamsburg. Burial will be at St. Paul Lutheran Cemetery with military rites by the Iburg Poulson VFW Post #8797. Visitation will be Sunday from 3:00 to 6:00 pm at the Powell Funeral Home in Williamsburg. A memorial fund has been established for Essence of Life Hospice and Lutheran Interparish School. Messages to the family may be directed to www.powellfuneralhomes.com.

To order memorial trees or send flowers to the family in memory of Harvey Von Ahsen, please visit our flower store.