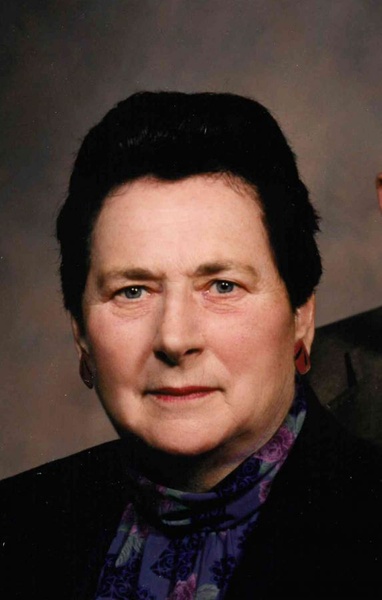 Helen Lucille Marine died March 28th just as red winged blackbirds had returned to Iowa. She was born November 21, 1922, in rural Washington County, the second of six children of Alvin and Elsie Hightshoe.

Helen eloped with Marion Marine. They told their parents that they were going to visit cousins, but got married in Kahoka, MO, on February 14, 1943. When they returned, they went back to their parents' homes as though nothing had happened. The cat was out of the bag when the marriage license arrived a week later and Marion's mother opened the mail.

Helen was encouraged to become a teacher by her beloved mentor, Mrs. Cecil Miller. After completing Normal Training at age 19, Helen taught country school in rural Iowa and Washington counties. Some of her first students were her siblings. "Mrs. Marine" also taught 10 years in Daytonville and 26 at Mid-Prairie Elementary in Wellman. Her career spanned 43 years and several generations of students. She always said second grade was her favorite because the children were so eager to learn.

Her students will remember fondly the fall unit on the pioneers. Everyone got to try printing with turkey quill pens dipped in elderberry ink. There were drip candles to make, and fruits and vegetable to slice and dry, just like in the olden days.

Helen got her B.A. and M.A. in education at the University of Iowa, the culmination of years of Saturday, evening, and correspondence courses. When she got home from teaching, there were farm chores, grading papers, lesson plans, and her own studying that lasted into the night. Her favorite farming chore was cultivating corn and beans. She watched for killdeer feigning a broken wing and always tripped out the cultivator to spare their nest.

There will be a graveside service at the Wellman Cemetery for immediate family.

Memorials may be directed to the Wellman-Scofield Library or Mid-Prairie Community School District Foundation.

A heartfelt thank you to everyone at Highland Ridge Care Center who shared their love and care for Mom.

Powell Funeral Home in Williamsburg is caring for Helen and her family. Messages and tributes may be left at www.powellfuneralhomes.com

To order memorial trees or send flowers to the family in memory of Helen Lucille Marine, please visit our flower store.