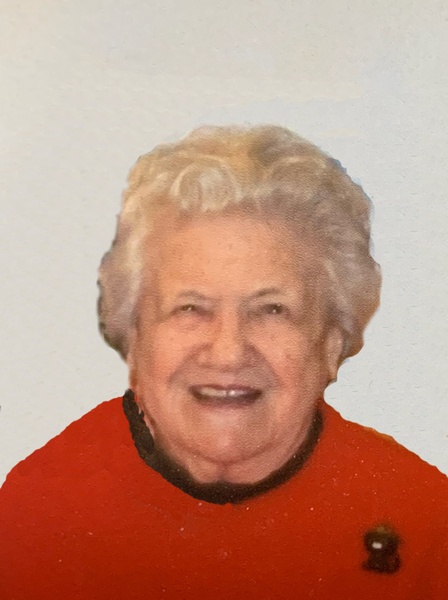 KEOTA-Irene Velma Baughman, age 101, of Keota, passed away on July 31, 2021 at Halcyon House in Washington, Iowa.
Irene was born on October 4, 1919, the daughter of Merwyn and Edith (Nussbaum) Gilliland, on a farm near the Merinet, Wisconsin and Manomini, Michigan border. At the age of 4, she moved to Iowa and spent her school years in Chariton, Iowa.
At the age of 20 she married James Fowler and during World War II worked in California in the shipyards. She had her own suburban grocery store and later owned two service stations. In 1959 she married Daryl Baughman and moved to Keota where they resided on the same farm for 57 years.
Irene was active in her community. She was a 50+ year member of the Rebekah Lodge, the V.F.W. Auxiliary, American Legion Auxiliary and 76 Club. Cooking was her long-standing passion. She was known as the cook for the V.F.W. stag dinners for 30 years. Her potato water donuts were a Keota Community favorite. Irene also gained great joy cooking for many family get-togethers.
Survivors include her husband: Daryl; one sister-in-law: Margaret Harriman of New York; nieces: Betty Remster, Judy Osborn, Linda Fenley, & Lisa Cox; nephews: Jim (Elaine) & Pat (Sandy) Halferty. She was preceded in death by her parents; sisters: Florence (Ed) Halferty, Nina (Jim) Foster, and brother, Darl Gilliland.
Funeral service will be held at 10:00 a.m. on Thursday, August 5, 2021, at Powell Funeral Home in Keota, with Rev. Cathy Nutting officiating. Burial will be at Brethren Cemetery near South English. Visitation will be from 9:00 a.m. until 10:00 a.m. on Thursday at the funeral home.
A memorial fund has been established for the Keota V.F.W. Post or Keota Fire Department. Powell Funeral Home and Cremation Service in Keota is caring for Irene and her family. Tributes may be made at www.powellfuneralhomes.com.

To order memorial trees or send flowers to the family in memory of Irene Baughman, please visit our flower store.