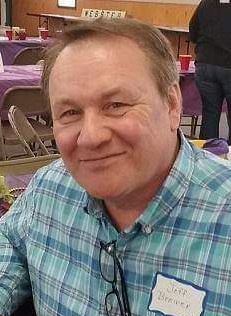 South English- Jeffrey Brower was born July 14, 1960 in Iowa City, Iowa, the son of Arlan E and Evelyn Louise (Butler) Brower. He graduated from English Valleys High School. He worked many years for Modern Co-op Telephone Co., in South English. Jeff married Michele Fuller, to this union, they were blessed with 3 children. They later divorced. Jeff was a member of the Webster United Methodist Church, where he served on various boards and committees. He was the sexton of the South English and White Pigeon Cemeteries. He enjoyed working, mowing and spending time with family. Jeff died suddenly on Sunday, May 31, 2020 at his home in South English at the age of 59 years.

Celebration of Life Memorial Service will be held 1:00 pm on Thursday, June 4, 2020 at Webster United Methodist Church in Webster. Visitation will be held 12:00 pm until service time at the church. Burial will be in the Brethren Church Cemetery, near South English. Powell Funeral Home in North English is caring for Jeff and his family. A general Memorial fund has been established. Messages and tributes may be left at www.powellfuneralhomes.com

To order memorial trees or send flowers to the family in memory of Jeffrey Dean Brower, please visit our flower store.