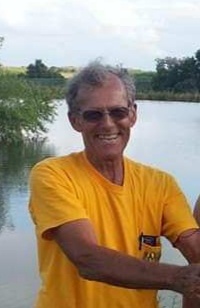 Webster- John Edward Lown was born May 26, 1946 in Sigourney, Iowa, the son of Arville Oral and Dorothy Mae (Stephenson) Lown. He attended Webster School and graduated from North English High School in 1964. He later went to Kirkwood Community College and received his degree in Agricultural Business. John served in the U.S. Army during the Vietnam War, during the time he was stationed in Vietnam, he took the classes and learned to be a heavy equipment operator. On February 12, 1977 John was united in marriage to Brenda Jo Stephenson in Webster. He was a heavy equipment operator for PCI, Jim Jones Dozing, Kinze Manufacturing and Seaton Construction. John was a member of the Webster United Methodist Church, the North Keokuk County Fire Department, the James Murphy American Legion Post #319, and the Cemetery Board. He enjoyed bulldozing, riding his Harley, coyote hunting with his friends, watching his children and grandchildren's activities and spending time with family and friends. John died on Tuesday, June 16, 2020 from complications of Agent Orange, at his home near Webster at the age of 74 years.

He is survived by his wife Brenda of Webster; four children Kedra Jackson of Kansas City, KS, Jeremi (Samantha) Lown of North English, Matthew (Danyl) Lown of Tiffin and Stephanie Lown of Cedar Rapids; six grandchildren Riley and Logan Jackson, Keyden and Kailor Lown and Faith and Grace Lown; a brother Larry (Linda) Lown of Pender, NE; and a sister Carol (Charlie) Trier of South English. He was preceded in death by his parents.

Celebration of Life Service will be held 10:30 am Saturday, June 20, 2020 at the Powell Funeral Home in North English. Burial will be in the Sorden Cemetery, near Webster with military rites. Visitation will be Friday, from 4:00 -7:00 pm at the Powell Funeral Home. In lieu of flowers memorials may be given to North Keokuk County Fire Department, Webster United Methodist Church or Essence of Life Hospice. Messages and tributes may be left at www.powellfuneralhomes.com

The family would like to thank Essence of Life Hospice for their wonderful care and support during this time.

To order memorial trees or send flowers to the family in memory of John Edward Lown, please visit our flower store.