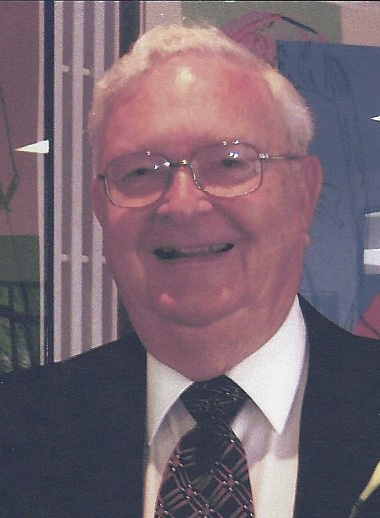 Williamsburg-John Thede Engel was born May 11, 1923 in Bennett, Iowa, the son of John G. And Ella Nora (Thede) Engel. He graduated from Bennett High School, attended Wentworth Military Acadamy, then the University of Iowa until he entered the United States Army serving from 1943 to 1946. John returned home to finish his education graduating with degrees in Chemical Engineering and Pharmacy. John was united in marriage to Adella Jane Peterson on September 20, 1944 in Williamsburg. To this union they were blessed with five children. Adella died May 17, 1993. John later was united in marriage to Virginia Lee Peterson on October 27, 1997 in Burlington. Virginia died August 28, 2010. John and Adella owned and operated Peterson Drug for many years, until their son Kenneth purchased the family business. John was a member of the First Presbyterian Church where he served as an elder. He served on the Williamsburg City Council and was Mayor of Williamsburg for eight years. He was a member of the Iburg Poulson VFW Post #8797, Lions Club, Masonic Lodge and the Iowa Pharmacy Association. He enjoyed fishing, watching the Iowa Hawkeyes, woodworking, collecting coins and stamps.
John passed away on Tuesday, September 10, 2019 at the Highland Ridge Care Center in Williamsburg at the age of 96.

Celebration of Life Service will be 10:30 am on Tuesday, September 17, 2019 at the First Presbyterian Church in Williamsburg. Burial will be at Oak Hill Cemetery with Military Rites by Iburg Poulson VFW Post #8797. Visitation will be Monday from 5:00 to 7:00 pm at the Powell Funeral Home in Williamsburg.
There will be a Masonic Service followed by a VFW Service at 7:00 pm Monday. In Lieu of flowers memorial may be given to University of Iowa College of Pharmacy Foundation, Iburg Pouslon VFW Post #8797 or Williamsburg Lions Club. Messages and tributes may be left at www.powellfuneralhomes.com.

To order memorial trees or send flowers to the family in memory of John T Engel, please visit our flower store.