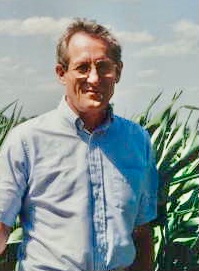 John William Laux Sr., 90, loving father, sports fanatic, Three Stooges fan, and admitted chocoholic, passed away peacefully on April 23, 2021, in Peoria, Arizona, with his family by his side and in his heart. Those who grieve his loss take comfort knowing he is reunited in heaven with the love of his life, Rosemary, who preceded him in death in 1992.

John was the first-born child of Howard and Ellen (Merz) Laux. He was born at their home in rural Keokuk County, Iowa on January 15, 1931, his parents' first anniversary. John served as a model of virtue and loyalty to his eight younger siblings and was revered as the eldest. His sister Karen fondly recalled that John generously bought the family their first television and later a kitchen set with his first paychecks.

After graduating from Keswick High School in 1948, John farmed with his father before joining the Coast Guard in 1951, where he was assigned to the USCGC Pontchartrain. It is unclear if it was concern for John's intense fear of water or the need for help on the farm, but John's father successfully petitioned for his son's release from the military. In 1953, John returned to the farm. However, soon after, he left to attend Parsons College in Fairfield, Iowa. While on a college break, John went to a dance in Harper, Iowa, and the rest, as they say, is history. An 18- year-old Rosemary Byrne immediately noticed the tall, good-looking college boy and beseeched her sister Patricia to intervene on her behalf. The dance that night led to a lifetime of dances. Doug, John's youngest brother, fondly recalls meeting the pretty Rosie when he was only 8 years old and her patience as he insisted on calling her Violet, Daisy, and any other flower name he could think of. John and Rosemary were married at St. Mary Catholic Church in Keota, Iowa, on August 9, 1956. The couple lived in Fairfield while John completed his degree, and this is where their first-born son, Kevin, was born.

In 1957, soon after graduating from Parsons, John relocated his young family to Davenport, IA, where they resided for the next 11 years. During that time, John worked for Iowa-Illinois Gas and Electric, expanding their family with five sons and three daughters. Heartbreak beset them when their third-born son, Gregory, was born with a heart defect and died at six weeks of age. In 1969, John moved his brood to Lawrence, Kansas, after accepting a position with the University of Kansas as a Systems Analyst. John worked with computers at a time when one took up an entire room. Reams of the used continuous printer paper he brought home from work became scratch pads for the kids. After six years in Lawrence and seeking a career change, the Laux family returned to Iowa, where John completed a second bachelor's degree at the University of Iowa. After graduating and becoming a Certified Public Accountant, John began work with Graf & Company Accounting, and the family once again settled in Fairfield, Iowa. John would continue to work for Graf during tax season, even after becoming the Comptroller for Iowa Malleable Iron Company, where he worked until the company closed. Retirement included Senior Olympics (yes, running track and the hurdles- often participating with his grandson Eric), volunteering, working for St Mary's Catholic Church, traveling, and spending time with his children and grandchildren.

Above all, John is remembered as a selfless, unassuming man of deep faith. He modeled his faith in the way he lived. He was not motivated by money, never sought out recognition, would give you the shirt off his back, and often rooted for the underdog. He was known for his gentleness and kindness to everyone. His children are grateful for his unwavering and unconditional support and remember him as a role model of love and service. This attitude of service extended beyond his family. In addition to being an active member of St. Mary, he volunteered to teach reading to illiterate adults, regularly did pro bono tax work, and for many years, he proudly displayed the pictures and letters of a child that he sponsored and supported through the Save the Children program.

In the same way, let your light shine before others, that they may see your good deeds and glorify your father in heaven.- Matthew 5:16

To order memorial trees or send flowers to the family in memory of John William Laux, Sr., please visit our flower store.