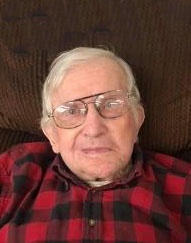 Marengo-John William McCallister was born April 26, 1923, in Williamsburg, Iowa. The son of John and Ocie (Martin) McCallister. John served in the United States Navy on the battleship New Jersey during WWII. John was united in marriage to Donna Marie Johnson on June 30, 1951 at the Methodist parsonage in Ainsworth. The couple lived in Ainsworth for 5 years before moving to Iowa County to make their home. He was a farmer and also worked at Amana Refrigeration. John enjoyed fishing, telling stories, playing cards and spending time with family. John passed away on Thursday, January 14, 2021 at the Rose Haven Nursing Home in Marengo at the age of 97.
He is survived by his wife Donna; four children, Joan (Larry) Towns of What Cheer, John (Jill) McCallister and Kay (Monte) Wenger all of Victor and Karen Thompson of Marshalltown; 14 grandchildren; 14 great grandchildren; a great great grandson and a brother, Daryle (Lila) McCallister of Williamsburg. He was preceded in death by his parents, two grandsons David and Brent and eight siblings, Curtis McCallister, Wayne McCallister, George McCallister, Donnie McCallister, Ruby Schwarting, Opal Conn, Eileen Wagner and Rita Butler.

To order memorial trees or send flowers to the family in memory of John William McCallister, please visit our flower store.