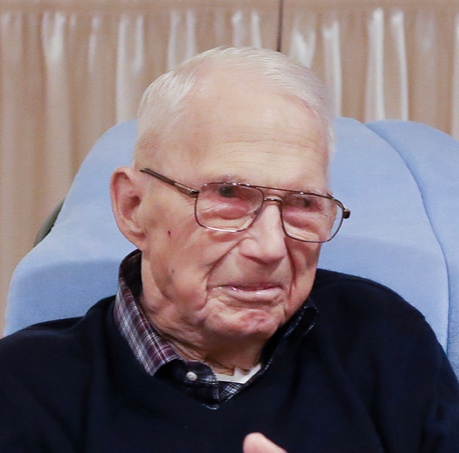 Williamsburg-Joseph Andrew Black was born December 7, 1919, rural Iowa County, near Holbrook, Iowa. The second of 8 children to John and Mary (McCarty) Black. He attended country schools in Iowa County and graduated from Williamsburg High School. After High School he farmed with his father near Holbrook. Joseph served with the United States Navy during WWII from 1944-1946. Joseph was united in marriage to Madonna Clare Murphy on October 17, 1959 at St. Joseph's Catholic Church in Parnell. They moved to the family farm near Holbrook where they raised their children. He served on the Board of Directors at REC from 1968-2001, and worked at Amana refrigeration from 1968 until retiring in 1985, to farm full time with Madonna and son Bob. Joe was a long time member of St. Michael's Church in Holbrook and is a current member at St Mary's in Williamsburg. He was a member of the Iburg Poulson VFW Post #8797, American Legion and Knights of Columbus. Joseph spent a lifetime being interested in the world. He was interested in and a supportive presence to family and friends. He enjoyed sports including the Cyclones (and the Haweyes when they weren't playing the Cyclones), reading newspapers, discussing politics and government at National, State and local levels. He will also be fondly remembered for his quick wit, humor and gentle wisdom that he shared with those around him. Joseph passed away on Sunday, February 16, 2020 at Colonial Manor in Amana at the age of 100.

Joseph, Madonna and family extend their gratitude to the staff at Colonial Manor and Essence of Life Hospice in Amana.

Funeral Mass will be 10:30 am on Thursday, February 20, 2020 at St. Mary's Catholic Church in Williamsburg. Burial will be in St. Michael's Cemetery in Holbrook. Visitation will be Wednesday from 3:00 to 7:00 pm at the Powell Funeral Home in Williamsburg. There will be a prayer service at 3:00 pm and a VFW military service at 7:00 pm. A memorial fund has been established for Essence of Life Hospice or Cystic Fibrosis Foundation. Messages and tributes may be left at www.powellfuneralhomes.com.

To order memorial trees or send flowers to the family in memory of Joseph Andrew Black, please visit our flower store.