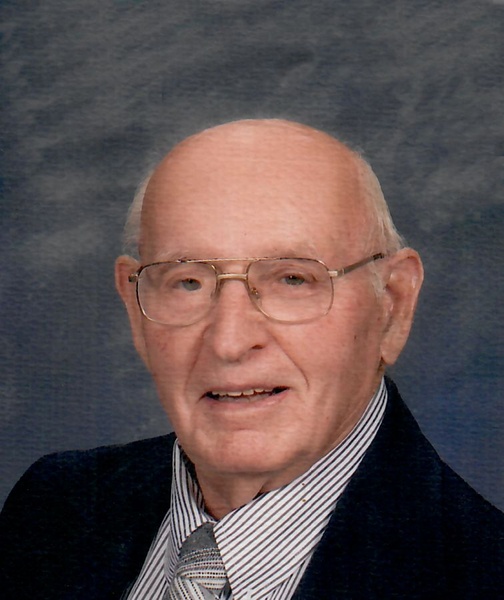 HARPER-Justin Hammen, age 97, of Harper, died Friday, December 3, 2021, at Windsor Place Senior Living in Sigourney.
Justin was born October 10, 1924, near Harper, to Charles and Mamie (Peiffer) Hammen and received his education in country school. On February 14, 1955, he married Joan Eberle at St. James Catholic Church in Washington, Iowa. The couple farmed and lived in the Harper area where they raised their family. After retirement they spent their winters in Apache Junction, Arizona. Their favorite pastime was attending polkas and waltzes and following the Barefoot Becky Band. Justin was a member of Holy Trinity Parish and especially enjoyed playing Skip-Bo and Kings on the Corner and mowing lawns and tending his flowers up until the age of 94.
Survivors include five children: Mary Jo (Mike) Schmitt of Kinross, Dave (Patty) Hammen of Harper, Pam (Bruce) Pecenka of Galesburg, Illinois, Joe (Cindy) Hammen of Wayland and John (Deana) Hammen of Washington; 16 grandchildren; 26 great grandchildren; brother: Harold (Donna) Hammen of North Liberty and two sisters-in-law: Martha Hammen of Washington and Elaine Eberle of Santa Barbara, California. He was preceded in death by his parents; wife: Joan in 2010; two sisters: Eleanor Hammen and Mary Sieren and four brothers: Charles, Leonard, Paul and Herbert Hammen.

Funeral Mass will be held at 10:30 a.m. on Tuesday, December 7, 2021, at Holy Trinity Parish - St. Mary Catholic Church in Keota. The service will also be live streamed on the Powell Funeral Home facebook page. Burial will be at Holy Trinity Cemeteries - St. Elizabeth Cemetery in Harper. Visitation will be from 4:00 p.m. until 7:00 p.m. on Monday, December 6, 2021, at the church, where there will be a wake service at 7:00 p.m.

A memorial fund has been established for Hospice of the Midwest or Windsor Place Senior Living. Powell Funeral Home and Cremation Service in Keota is caring for Justin and his family. Tributes may be made at www.powellfuneralhomes.com.

To order memorial trees or send flowers to the family in memory of Justin Hammen, please visit our flower store.