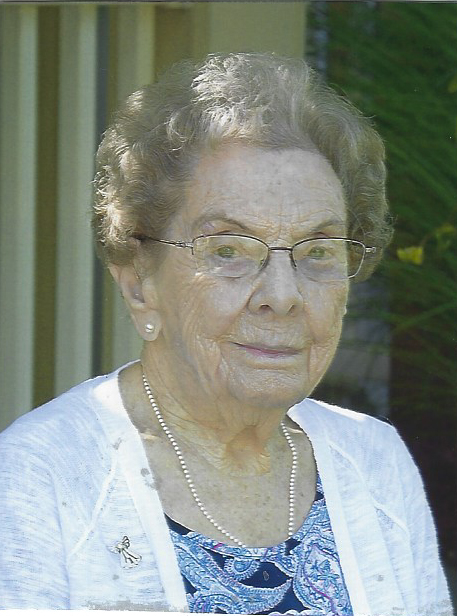 Leita Corinne Reed was born August 25,1918 near South English, Iowa, the daughter of Harley Franklin and Margaret Velda (Kurtz) Blaylock. She graduated from Kinross High School in 1934 and attended William Penn College in Oskaloosa. On November 20, 1939 she was united in marriage to Harry Reed in Ottumwa. After their marriage they moved to North English. From 1980- 2005 they spent the winters in Florida. In 2005 Leita moved to Williamsburg and later moved to Iowa City in 2016. Leita was a member of the North English Christian Church. She enjoyed spending time with her grandchildren, having coffee with her neighbors and friends, cooking, baking and enjoying a margarita in Florida. Leita died on Tuesday, September 24, 2019 at Legacy Pointe in Iowa City at the age of 101 years.
Leita is survived by her children Trudy and husband Bill Spratt of Iowa City and Jim and wife Cheri Reed of Coralville; six grandchildren Tricia (Brian) Fairfield, Teri (Dan) Stevenson, Tracey (Curt) Peak, Jon (Rainey) Reed, William Travis (Kilee) Spratt and Annie Brook (Roger) Ritchie; 11 great grandchildren Colin & Ethan Fairfield, Riley & Nolan Stevenson, Ashley & Morgan Peak, Whitney & Ellie Spratt, Taylor Reed, Grady Hinton & Levi Ritchie; a sister-in-law Irene Blaylock of South English and numerous nieces & nephews. She was preceded in death by her parents, step mother Ella Blaylock, husband Harry in 1997, two brothers Marvin and Leon Blaylock and a sister-in-law Jessie Blaylock.

Celebration of Life Memorial Service will be held 11:00 am on Saturday, November 30, 2019 at the Powell Funeral Home in North English. Visitation will be from 10:00 am until service time. Burial will be in the North English Cemetery. Memorials are for Iowa City Hospice. Messages and tributes may be left at www.powellfuneralhomes.com

To order memorial trees or send flowers to the family in memory of Leita Corinne Reed, please visit our flower store.