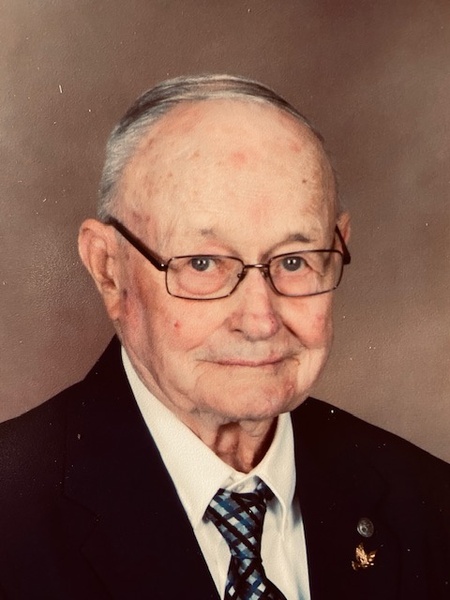 Parnell- Leo "Jack" Johnson was born January 18, 1930 in Brighton, Iowa. The son of William and Viola (Waggoner) Johnson. He attended Parnell School until enlisting in the Navy. He served in the United States Navy from 1949 to 1969 retiring as a AMCS. Jack was united in marriage to Mary Sullivan on September 6, 1951 in Parnell. To this union they were blessed with three children. Mary passed away in 2004. Jack later was united in marriage to Marilyn Donohoe Hanson on November 3, 2006 in Parnell. Jack worked for the United States Postal Service in Iowa City then Parnell serving as Postmaster for 20 years. He formerly was an active member of St. Joseph Catholic Church in Parnell serving as a lector and later the leader of the Parnell Rosary Group. He enjoyed collecting John Deere tractors, gardening, fishing, hunting and spending time with family and friends. He was a 50 year member of the Parnell American Legion. Jack passed away on Wednesday, May 13, 2020 at the English Valley Care Center in North English at the age of 90.

To order memorial trees or send flowers to the family in memory of Leo "Jack" Johnson, please visit our flower store.