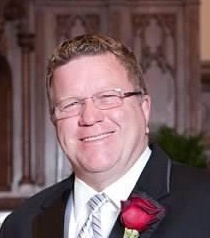 Conroy-Lowell Gene Kleinmeyer, 68, lost a 7-year battle with Renal Cell Carcinoma on Sunday, July 4, 2021, surrounded by his family at home. He fought like a true Marine until the end.
Lowell was born in April 21, 1953 in Williamsburg, Iowa to Edwin and Dolores (Sandersfeld) Kleinmeyer. He graduated from Amana High School and enlisted in the Marines. He was a member of the Color Guard and served as a Military Policeman and drug dog handler in Yuma, AZ until 1975. Lowell worked 28 years at Williamsburg Manufacturing and another 9 for Martinrea in various managerial roles. He married the love of his life, Joan Stahl, on December 20, 1975. They were blessed with three daughters, Holly, Jenny and Kaytee. He was a devoted husband, father, father-in-law and his favorite role of Papa to his two granddaughters.
Lowell was a faithful member of St. Paul's United Methodist Church in Williamsburg where he served on various committees. He was an avid Hawkeye Wrestling fan, touting that he attended wrestling matches before Carver was even built. Lowell enjoyed spreading Christmas cheer, spending time at the Lake of the Ozarks, or traveling internationally, especially with his mother-in-law Alice and sister-in-law Jan. He enjoyed spending time with his family, playing golf, racquetball, fishing and volunteering on the Williamsburg Booster club leading many school projects and basketball tournaments. Lowell loved a meticulous lawn and playing frisbee with his dogs. Lowell will be missed for his homemade ice cream, sparkling blue eyes, sense of humor and mischievous smile.
Lowell is survived by his beloved wife, Joan; his three daughters, Holly Kleinmeyer, Jenny Kleinmeyer and Kaytee (Geoffrey) Knoop; two granddaughters, Adelaide and Madeline Knoop. He is also survived by his daughter, Mindy (Ken) Bratz, Chloe Cordle and Hunter Adams; his mother, Dolores; siblings Tim Kleinmeyer, Barb (Chuck) Granger and Dennis Kleinmeyer; his in laws, Jan (Steve) Slaymaker, Jeanie (Russ) Kisling, Doug (Jodi) Stahl, and numerous nieces and nephews. He's preceded in death by his father, mother and father-in-law, Jim and Alice Prince, and sister-in-law Susie Williams.
A Celebration of Life Service will be 10:30 am on Friday, July 9th, 2021 at the St. Paul United Methodist Church in Williamsburg. Visitation will be Thursday from 3:00 to 7:00 pm at the Powell Funeral Home in Williamsburg. Burial will be at the Pilot Grove Cemetery near Williamsburg with military rites by the Iburg Poulson VFW Post #8797 of Williamsburg. A general memorial has been established. Messages and tributes may be directed to www.powellfuneralhomes.com.
The family would like to thank Dr. Champion and Dr. Ekroth of Mercy Iowa City and the Oncology Team at the University of Iowa Hospitals and Clinics for exceptional care and compassion they have shown throughout this journey.
SEMPER FI - fair winds and following seas

To order memorial trees or send flowers to the family in memory of Lowell Gene Kleinmeyer, please visit our flower store.