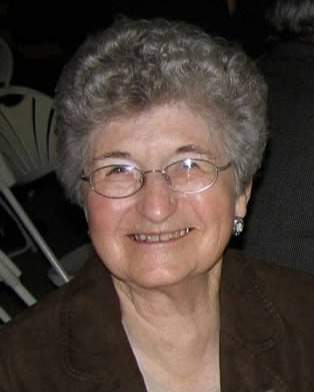 Marilyn was born in an Iowa farmhouse in Iowa County, the first-born daughter of Russell and Ella (Hochstetler) Kinsinger. She attended public schools until her high school junior and senior years when she transferred to the Hesston Academy, Hesston, Kansas and graduated in May of 1947. On December 29, 1947, Marilyn married her love, Dwight Slaubaugh. They lived together on Iowa farms, raising their four children, while being involved in the West Union Mennonite Church community and its outreach work. There were years when they hosted exchange students from Haiti; also, from Chicago and Muscatine, who attended high school at Iowa Mennonite School.

Marilyn lived a life that reflected her great faith and love for her children and all who met her. During the 1952 epidemic, she came down with polio - with two small children and the third on the way. Marilyn showed great strength during that time - striving ahead to overcome what she could. The illness left her with a weaken right arm that she could not lift by her own power. Never did she complain but worked hard at physical therapy to improve. She overcome much - learning to write with her left hand and finding a way to accomplish everything she set her mind on to do. She liked to knit dish cloths of all colors and designs which made lovely gifts that many received.

On October 30, 1993, a number of years after Dwight’s untimely death, Marilyn married Wally Fisher, who had lost his beloved wife, Evelyn, earlier to cancer as well. They spent twenty-five happy years together until Wally’s death in March of 2018. Wally’s children: Gretchen, Mary Christine, Daniel, Ted, and their families were dear to Marilyn as well as her own.

Marilyn was proceeded in death by her parents, her husband Dwight, her husband Wally, and her son David.  She is survived by daughter Bonnie and husband Tom Stuckey of Ohio, David’s widow Faye of Kalona, Iowa, Jean and husband Bill Schneider of Wellman, Iowa, and Doug and wife Carla of Parnell, Iowa. Grandchildren are Aaron and Tyson Stuckey, Shawn Slaubaugh, Alicia Berry, Sarah Showalter, Morgan Schneider, Nicole Miller, Justin Slaubaugh, Amber Miller, Troy Slaubaugh, and Haley Bontrager with a total of 27 great grandchildren. She is also survived by her sister Myrna and husband John Farraj and their three children, Chuck, Tony, and Rima who loved their Aunt Marilyn very much and will always remember how she cared for them during their wonderful days on the farm.

To order memorial trees or send flowers to the family in memory of Marilyn Slaubaugh Fisher, please visit our flower store.