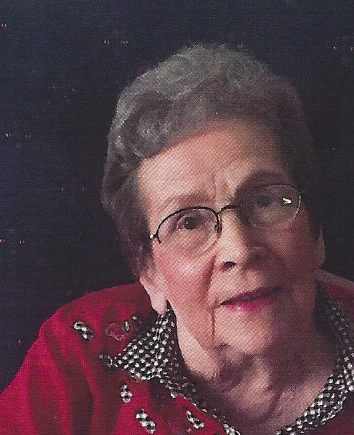 She was born June 29, 1927 to Otto and Lena Beer in Dois Irmaos, Brazil, where her parents were Lutheran missionaries. After their 10 year commitment, the family returned to the U. S., lived in Springfield, IL, until her father became the pastor at St. John's Lutheran Church, Homestead.

She attended parochial school there, then graduated from Marengo High School in 1945. The following year she taught first grade at St. John's. Paula was united in marriage to Reinhold Sandersfeld on June 29, 1947 at St. John Lutheran Church near Homestead. They farmed until 1965 when they moved to Williamsburg, where she held several part-time jobs over the years, working in an optometrists' office, at a drugstore and in a winery gift shop.

Paula was a life-long member of St. John's Church, the Ladies' Aid and mixed choir. She had been a resident at English Valley Care Center in North English and enjoyed the activities and the daily card games. She was an Iowa Hawkeye fan who faithfully watched football and men's basketball games...unless there were cards to be played!

She was preceded in death by her parents; husband; four sisters, Dorothea Beer in infancy, Helen Sandersfeld, Esther Sandersfeld and Norma Mollison.,
Celebration Of Life Service will be 11:00 AM Thursday, September 12, 2019 at St. John's Lutheran Church near Homestead. Burial will be in the St. John's Cemetery. Visitation will be Thursday from 9:30 until service time at the church. Memorials are for St. John's Lutheran Church or English Valley Care Center in North English. Powell Funeral Home in Williamsburg is caring for Paula and her family. Messages and tributes maybe left at www.powellfuneralhomes.com.

To order memorial trees or send flowers to the family in memory of Paula Sandersfeld, please visit our flower store.