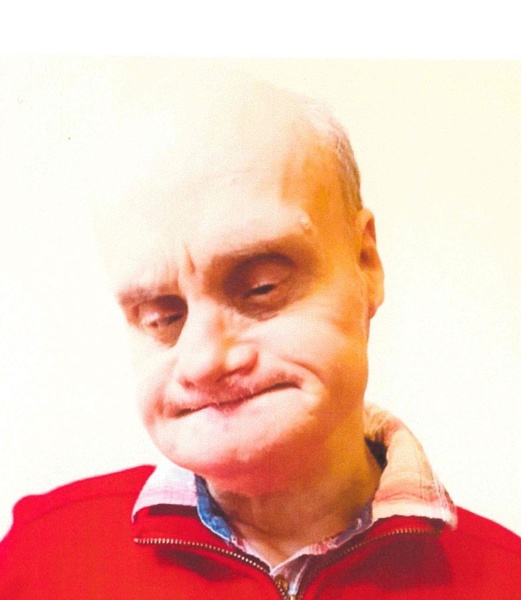 Kalona- Richard Allan Threlkeld was born December 18, 1966, in Oskaloosa, IA. The son of Melvyn and Velma (Cozart) Threlkeld.
He attended school at Mid-Prairie then in Iowa City . He graduated from West High School in Iowa City.
He moved into Systems Unlimited when he was 14. In 1998 he moved to Reach For Your Potential where he attended the Day Center and lived in a group home.
Richard enjoyed music, rocking in his chair, food (his favorite was Basbausa ,Baklava, and chocolate cake), , playing with his sensory toys, the outdoors, and his stocking caps.
Richie was notorious for going to the pool and believing that swimsuits were optonal. He also was known for escaping locked kitchen doors and visiting the neighbor in his garage.
He enjoyed keeping the staff on their toes by removing as many pieces of clothing as possible as quick as possible. Before losing his sight due to cataracts he loved to grab your cookie as he walked by.
He enjoyed spending time with his friends and the Reach family; Amen Mokhtar, Magdi Mohamed, Madi Abdelrhman, Nasir Ahmed, Ahmed Tohfa, Museyil Sunday,Ismail Khalil,
Erica Moffit, Sunae Davis and many more from Reach For Your Potential.
Richard passed away Friday, April 16, 2021 at his home in Iowa City at the age of 54 years.
He is survived by his aunt Helen Lund of Coralville, two sisters, Barbara Threlkeld of Iowa City and Virginia Threlkeld Larsen of North English, a brother, Danny (Jean) Threlkeld of Richland, Ben (Jen)Threlkeld, Sam Clayton, Angila Chapek and numerous nieces and nephews.
He is preceded in death by his parents, brother Kenneth, sister Laurie Threlkeld (Kephart),
2 nephews William David and Daniel Steven Threlkeld, and niece Robin Erin Brown.
A clebration of life service will be held at10:30 am Tuesday, April 20, 2021 at the Yoder-Powell Funeral Home in Kalona, the service will be streamed on Facebook . Burial will be at Forrest Cemetery in Oskaloosa at 1:00 pm. Visitation will be from 3:00 to 6:00 pm Monday at the Yoder-Powell Funeral Home in Kalona.
A memorial fund will be established by the family . Messages may be sent to the family at.www.powellfuneralhomes.com. Www

Richard exceeded expectations for a person with Down's Syndrome. He was clever, quick, smart in unexpected ways. He enjoyed good health until his death. He will be greatly missed and our world is a sadder place.

To order memorial trees or send flowers to the family in memory of Richard Threlkeld, please visit our flower store.