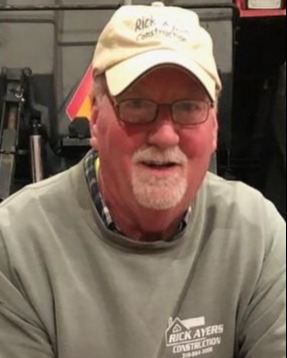 North English- Rick Wayne Ayers was born June 2, 1954, in Davenport, Iowa, the son of Robert Lee & Alice Josephine (Moore) Ayers. He graduated from North English High School in 1973. On February 5, 1972, Rick was united in marriage to Mary Lu Johnston at St. Joseph Catholic Church in North English. He owned and operated Rick Ayers Construction. Rick was very active in the North English community. He was a member of the Jaycees, North English Fire Department, Knoll Ridge Country Club Board, English Valleys School Board, Ducks Unlimited, Pheasant’s Forever, the 911 Board and a registered organ donor. He enjoyed playing dummy boards, hunting, fishing in Canada, 4-wheeling, spending time at the cabin and campsite, golfing with “Pilk” his partner of 36 years, and spending time with his grandchildren and family. Rick died on Friday, January 13, 2023, at his home in North English, at the age of 68 years.

Celebration of Life Service will be held 10:30 am on Thursday, January 19, 2023, at the Powell Funeral Home in North English. Visitation will be held on Wednesday, from 3:00 - 7:00 pm. A general memorial fund has been established. Messages and tributes may be left at www.powellfuneralhomes.com.

To order memorial trees or send flowers to the family in memory of Rick W Ayers, please visit our flower store.