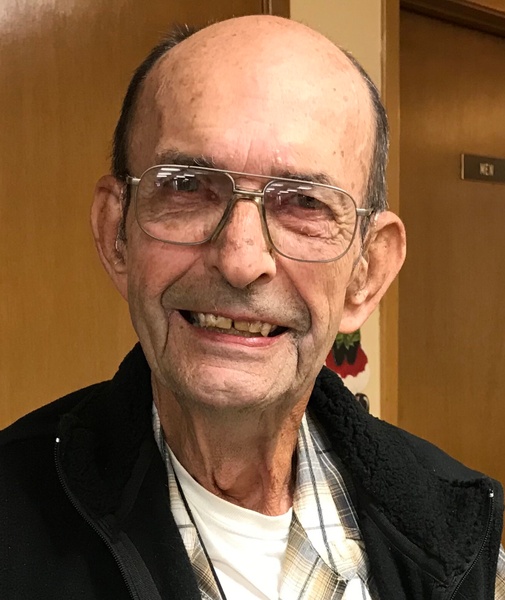 SOUTH ENGLISH-Robert Leroy Bowman, age 83, formerly of South English, died Friday, August 12, 2022, at Colonial Manor in Amana, due to complications of a stroke.

Bob was born at home in Webster, Iowa, on December 5, 1938, the son of Burdette Yoakam Bowman and Annabelle Winegarden.  Bob’s life was changed by a near fatal encephalitis infection at age 6.  Nevertheless, he graduated from English Valleys High School in 1957, part of the last class of Webster High School.  He then enlisted in the U.S. Air Force from 1957 until 1959.  Subsequently he worked as a truck driver for Warder and Lee in Webster for 16 years and as a custodian at the University of Iowa for 25 years.  He was a member of the Odd Fellows and Good Sam’s Club, donated gallons of blood and achieved 40 years of sobriety.  Bob loved to drive and to build.  He made barn board picture frames, built a miniature steam engine he exhibited at the Old Threshers Reunion and built a replica of the Delta covered bridge as well as many other projects.

Survivors include his brothers: Wayne (Bonnie Love) of Iowa City, John (Myra) of Britt and William (Chris) of Boone.  Also surviving are a nephew: Ryan Bowman of Clear Lake and nieces: Jill Bowman Peterson (Ben) of Bloomington, Minnesota, Abigail Bowman Thoman (Jeremy) of Ankeny and Ashley Bowman Williams (Cory) of Boone.  He is also survived by ten great nieces and nephews.  He was preceded in death by his parents and grandparents: Hattie and Jacob Bowman and Anna and Virgil Winegarden.

Funeral service will be held at 11:00 a.m. on Tuesday, August 16, 2022, at Powell Funeral Home in Sigourney, with Tom Grove officiating.  Burial with military rites will be at Sorden Cemetery near Webster.  Visitation will be from 9:00 a.m. until 11:00 a.m. on Tuesday at the funeral home.

A memorial fund has been established for the Keokuk County Historical Society or Colonial Manor Activity Fund.  Powell Funeral Home and Cremation Service in Sigourney is caring for Bob and his family.  Tributes may be made at www.powellfuneralhomes.com.

To order memorial trees or send flowers to the family in memory of Robert Leroy Bowman, please visit our flower store.