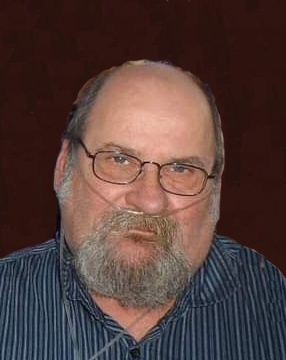 OLLIE-Steven Lee Tinnes, age 65, of Ollie, died Thursday, August 26, 2021, at his home.
Steven was born July 9, 1956, in Washington, to LeRoy and Sandra (Leoffler) Tinnes and received his education in Keota, Strawberry Point and Mid-Prairie Schools. He served in the U.S. Air Force from 1973 until 1975. On January 24, 1976, he married Kimberlea Cupps at the Presbyterian Church in Keota. A jack of all trades, Steven had many jobs over the years, including working in a coal mine, on the railroad and driving truck. He enjoyed rock and arrowhead hunting, fishing, being outdoors and flower gardening.
Survivors include his wife: Kimberlea Tinnes of Ollie; son: Jeromy (Amber Baker) Tinnes of Ollie; daughter: Shannon (Brandon Yates) Tinnes of Ollie; nine grandchildren; five great grandchildren; two brothers: Dale (Gail) Tinnes of Wellman and Larry Tinnes of Keota; two sisters: Sandy Tinnes of Keota and Marcy (Rick) Hagans of Washington and his mother: Sandra Ayers of Washington. He was preceded in death by his father: LeRoy Tinnes; son: Zachary Tinnes and grandparents: August "Petey" Tinnes, Darlene Wheaton and Dale and Opal Leoffler.

Funeral service will be held at 2:00 p.m. on Wednesday, September 1, 2021, at Powell Funeral Home in Keota, with Pastor Doug Tinnes officiating. Visitation will be from 12:00 p.m. until service time on Wednesday at the funeral home.

A general memorial fund has been established. Powell Funeral Home and Cremation Service in Keota is caring for Steven and his family. Tributes may be made at www.powellfuneralhomes.com.

To order memorial trees or send flowers to the family in memory of Steven Lee Tinnes, please visit our flower store.