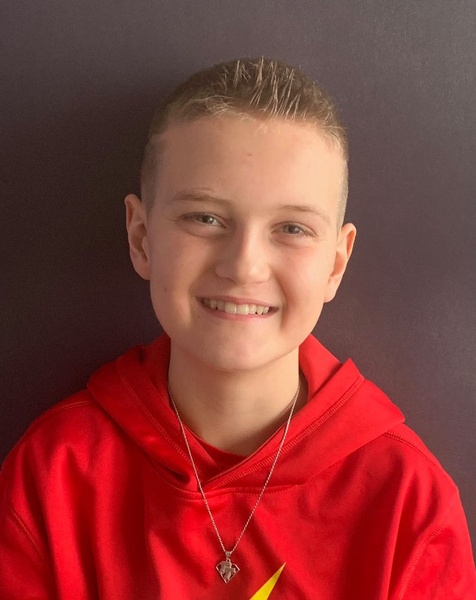 Williamsburg-Tate Bradley Schaefer was born August 13, 2007 at Mercy Hospital in Iowa City, Iowa to Brad and Darcy Schaefer. He entered this world full of laughter, compassion, spirit, and always smiling and that is how he left us. After being the most courageous warrior and faithful servant in a battle against DIPG for 27 1/2 months, Tate ran into the arms of his Savior on Monday morning March 29, 2021 at the age of 13. He was surrounded in love and comfort by his parents and loving sister, Teagan.
Tate was a member of Immanuel Lutheran Church where he was baptized Sept 16, 2007. It was here that his faith and love for Jesus grew and allowed him to be at peace with being called to his Heavenly home.
Tate attended Williamsburg Schools his entire life and was always proud to be a Raider! In addition to idolizing his hometown heroes, Tate loved his Iowa Hawkeyes and Chicago Cubs. He could be found any game day in front of the TV or watching passionately in person with his competitive spirit. Tate and his family had the opportunity to be a part of Los Angeles Rams football games as well as watch The Masters in person...every sports fan dream! Sports meant so much to Tate beyond a win or a loss. It allowed him to find people he idolized and looked up too, create lifelong friendships, and provide him an outlet to truly be himself.
Tate loved his family and his friends with everything he was and had the most amazing and beautiful sister with whom he shared a bond that can never be broken. He was often the source of a good joke and the laughter that followed and could sit down and enjoy time with anyone of any age.
Tate is survived by his parents Brad & Darcy Schaefer; a sister Teagan Schaefer all of Williamsburg; grandparents Gene & Carla Schaefer of Williamsburg and Gene & Diane Von Ahsen of Homestead; great grandma Esther Trimpe Sandersfeld; Aunts, Uncles & Cousins: Becca Schaefer of Williamsburg; Derek, Jessica, Jackson, Cole, Olivia Von Ahsen of South Amana; Beth (Nate Weltner) of Ankeny; Brett, Jane, Will, Kate Van Zee of Clive; Lindsay, Shane, Lauren, Ethan Alertsen of Granger; and Jillian, Stephane, Zoe, Tessa Laroche of Nigeria, Africa.
He was preceded in death by his Grandma Angel Linda Schaefer; Great Grandparents; and fellow warriors who have found their healing in Heaven.
We will all miss the joy Tate brought to our lives while he was here, his amazing smile that warmed every heart who saw it, his ability to bring laughter to every situation...everything about him. If you knew him, you know what he meant to you and how he made your life better by being in it. Tate would want you each to remember that and honor him by loving and living like he did.

Celebration of Life Service will be held 10:30 am on Friday, April 2, 2021 at the Williamsburg High School Gym. The service will be Live streamed on YouTube Williamsburg CSD Raiders. Pastor Richard Meyer will officiate. Burial will be in the Immanuel Lutheran Cemetery. Visitation will be on Thursday, from 2:00 - 7:00 pm at the Williamsburg High School Gym. Please show your support and wear TaterTough gear. In lieu of flowers, memorials may be given to the TaterTough Fund at PO Box 689, Williamsburg, Iowa 52361. Powell Funeral Home in Williamsburg is caring for Tate and his family. Messages and tributes may be directed to www.powellfuneralhomes.com.


The funeral service on Friday, will be livestreamed on the Williamsburg High School You Tube Channel.
https://www.youtube.com/c/WilliamsburgCSD

To order memorial trees or send flowers to the family in memory of Tate Bradley Schaefer, please visit our flower store.