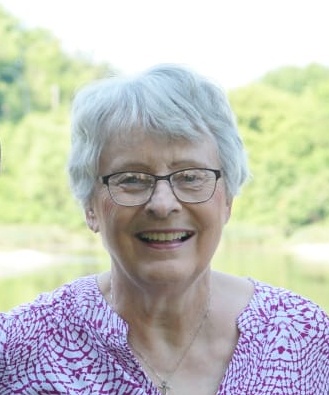 Ginny was born March 13, 1940, in Haverhill, Iowa, to Alphonse and Christina (Knoll) Pille.  She moved to Newton at the age of four and graduated from high school there.  She then received her B.A. in Education from what is now the University of Northern Iowa.  On July 27, 1963, she married Eugene “Bubsy” Strohman in Des Moines.  The couple lived and farmed in the Harper area until moving to Sigourney in 1991.  Ginny also taught school for four years and did tax preparation for several years.  She was a member of St. Mary Catholic Church in Sigourney, the Altar and Rosary Society, Listen-a-Bit Club, Sigourney Lions Club, the Red Hats and served on the Auxiliary Board of the Keokuk County Hospice Foundation.  Ginny enjoyed family, friends and serving others.

A memorial fund has been established for St. Mary Catholic Church or the Keokuk County Hospice Foundation.  Powell Funeral Home and Cremation Service in Sigourney is caring for Ginny and her family.  Tributes may be made at www.powellfuneralhomes.com.

To order memorial trees or send flowers to the family in memory of Virginia "Ginny" Strohman, please visit our flower store.