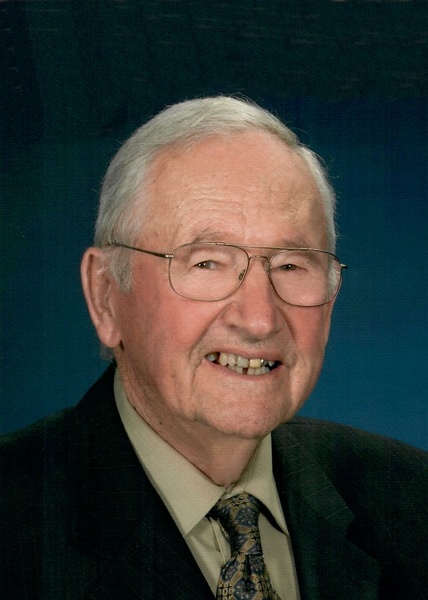 KEOTA-Frank William Gretter, 96, died on October 23, 2021 at home in rural Keota, Iowa. He was born in rural Harper, Iowa on October 23, 1925 to Wynn and Margaret (Flander) Gretter. He graduated from Saint Elizabeth School in Harper. On March 31, 1951 he married Audrey Ann Smith at Saint Elizabeth Catholic Church. The same year he was married, he was drafted into the Marines. He was stationed in South Korea and served the United States during the Korean War. He ran and operated the family business, W.C. Gretter's and Sons with his brother Robert and farmed in the Harper area his entire life. Bill, as he was known to most, was a member of Holy Trinity Parishes - St. Mary's Keota, the Knights of Columbus Windthorst Council, a 4th Degree Knight Father Grothe Assembly, and the VFW of Keota. He coached Harper baseball for many years. He served on both the St. Elizabeth School Board and the Keota Community School Board. He felt blessed to live in a such a wonderful community! He loved spending time and fishing with his family on Canyon Lake near Vermillion Bay, Ontario every summer. He enjoyed playing cards and singing!
He is survived by his wife Audrey, six daughters Kathleen Gretter of Cedar Rapids, Janet Gretter of Ames, Amy (Brian) McCarville of Kansas City, Missouri, Ann (Fox Vernon) Gretter of Alexandria, Virginia, Julie (Richard) Lundstrom of Kansas City, Missouri and Carol Gretter of New York, New York, five sons Frank Gretter of Keota, Michael Gretter of Luis Eduardo Magalhaes, Brazil, David (Barb) Gretter of Harper, Andrew Gretter of Playa Del Coco, Costa Rica, and Mark Gretter of Dallas, Texas, 7 grandchildren - Je'taime, Jill, Blair, Jennifer, Luke, Charles, and Owen, and 7 great-grandchildren. He was preceded in death by his parents, three sisters, Martha Hammes, Virginia Bombei, Dorothy Mikel, and brother John Robert Gretter.

Memorial mass will be held at 10:30 a.m. on Friday, October 29, 2021, at Holy Trinity Parish - St. Mary Catholic Church in Keota, with Rev. Robert Lathrop presiding and Rev. Charles Fladung concelebrating. Burial will be at Holy Trinity Cemeteries - St. Elizabeth Cemetery in Harper. Visitation will be from 4:30 p.m. until 7:00 p.m. on Thursday, October 28, 2021, at the church, where there will be a vigil service at 4:00 p.m.

A memorial fund has been established for the Keota Veteran's Memorial, Knights of Columbus and Holy Trinity Parish. Powell Funeral Home and Cremation Service in Keota is caring for Bill and his family. Tributes may be made at www.powellfuneralhomes.com.

To order memorial trees or send flowers to the family in memory of William "Bill" Gretter, please visit our flower store.