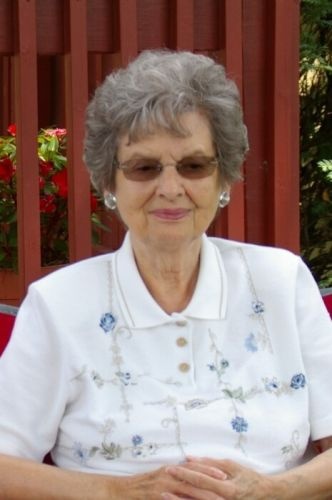 A private graveside service will be held at Forest Home Cemetery with Pastor Jeff McPheron officiating.A celebration of Wilmas life will be held at a later date. Gifts of love and friendship have been designated to Des Moines County Humane Society or Danville Public Library and may be sent to the family or dropped off or mailed to Olson~Powell Memorial Chapel, P.O. Box 656, Mt. Pleasant, IA, 52641. On-line condolences may be directed to www.olsonpowell.com.

Born October 3, 1931, in Wapello, IA, Wilma Maxine was the daughter of Leo H. and Sara Jane (Hoffman) Longshore. She was a 1949 graduate of Keokuk High School. Later she took classes at the Keokuk Campus of Southeastern Community College. On April 30, 1950, Wilma married Donald W. Harmon at Trinity Methodist Church in Keokuk. He preceded her in death on August 13, 2018.

Following high school, Wilma was a secretary for Rupley Electric, Keokuk Electric, and Parmeter Electrical Contractors. She moved to Danville in 1972 and using her bookkeeping skills she was the City Clerk of Danville and then was employed at General Electric in Burlington until the time of her retirement.

Wilma was a member of Trinity United Methodist Church in Keokuk and when she moved to Danville became a member of Danville Methodist there. She liked quilting and was a member of various quilting groups. Wilma was a faithful volunteer at the Danville Public Library. She loved ballroom dancing with her husband, was an avid bird watcher, and enjoyed wine tasting with family at different wineries. Most importantly, she treasured her family and followed the many activities of her grandson and later her great-granddaughter. For many years, Wilma attended the Drake Relays with her family.

Along with her parents and her husband, Wilma was preceded in death by a brother, Leo Longshore, Jr.; and two sisters and their husbands, Elva (Richard) Hedrick and Bethene (Donald) Phillips.

To order memorial trees or send flowers to the family in memory of Wilma Harmon, please visit our flower store.