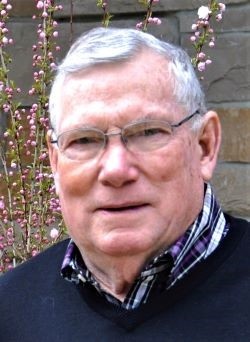 Please join the Topping family for refreshments and dessert. Public remembrances will not be shared during the open house.

Robert "Bob" Joe Topping, age 85 of Decorah, IA passed away Saturday, February 19, 2022, at the Winneshiek County Medical Center from complications of a stroke. Please view the video tribute below this obituary and see the guest book at the bottom of the page, to leave tributes.

Bob was born September 4, 1936, at home in Wellman, IA to Dallis and Dorothy (Nelson) Topping. He was the youngest of three boys (William, Donald, and Robert) and was raised from very humble beginnings. When Bob was 7 years old (1943) their main street family business and upstairs apartment where they lived was badly damaged by a fire, which took a full year to be rebuilt at that time. He will never forget how the Fire Chief barely got the family out safely and later retrieved his shoes for him. He lost his father to a heart attack when he was 15 years old in 1951.

Bob graduated from Wellman High School in 1956 with a class of 28 students. He was involved with many activities and clubs in high school and was a quiet team leader, excelling on his football, basketball, and track teams. He was very proud of his hometown and school and remained life-long friends through the years with many through personal contact and class reunions.

Bob went on to attend Coe College in Cedar Rapids, IA and earned his BA and Teaching Certificate, graduating in 1960. While at Coe College he played football from 1957-59 and played both ways as a fullback and linebacker on the '58 & '59 Midwest Conference Championship Teams. He was also a member of the Sigma Nu Fraternity.
His sophomore year at Coe College, Bob met the "love of his life," Judith (Judy) Ringbloom of Edina, MN. They were married June 11, 1960, at Mt. Olivet Lutheran Church in Minneapolis, MN; presided by Dr. Reuben K. Youngdahl. Bob and Judy had 61+ wonderful years of marriage together.

Bob was asked to try out for the Chicago Bears and New York Football Giants Pro Football Teams but instead took his first teaching and coaching job at Sumner, IA in 1960. He taught Government and Economics and was the head football and track coach at Sumner High School for 13 years until 1973. During their time in Sumner, they had three children: Thomas, Steven, and Jill.

Bob then took a teaching and coaching job at Decorah High School (Decorah, IA) in the Fall of 1973. He taught Government and Economics for senior students, until his retirement in 1997. He also coached football and track for several years at Decorah, coaching one of the first girl's track teams for the school.  He also worked as a sports official for high school football, basketball, softball, volleyball, and track for over 40 years, working several years with his son Tom. All told, he taught students for 37 years.

He also worked as a sports official for high school football, basketball, softball, volleyball, and track for over 40 years, working several years with his son Tom.

Retirement years were busy and filled with following the activities of his 7 grandchildren and 1 great grandchild, vacations to Mexico and Florida and many, many summer trips over 60 years to their family lake cabin at Nestor Falls, Ontario, Canada.

Bob was so proud of his children and grandchildren and their hard work with their education, athletics, activities and all their accomplishments. Equally proud were his grandchildren of their grandfather. They described Grandpa Bob as: a great teacher, very patient, our biggest fan, thoughtful, sincere, kindhearted, organized, strong, extraordinary, amazing, kind, remarkable, quiet, tenacious, respected, had a lot of common sense and was a great storyteller. He was always teaching, coaching, mentoring, instilled hard work and always wanted the best for others. Bob just loved helping neighbors and anyone that needed it. Those that knew him well, described him as "just a really good guy" with a great sense of humor. He was a true patriot and loved his country.

To order memorial trees or send flowers to the family in memory of Robert Topping, please visit our flower store.