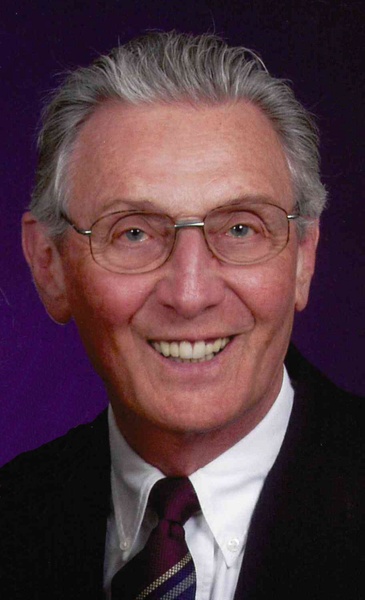 Barry was born June 14, 1934, in LeMars, Iowa, the son of Elmer and Emily Mae (Eichhorn) Holtgrewe. He graduated from Remsen High School, attended Drake University for two years and received his bachelor’s degree in education from the University of South Dakota. On June 30, 1952, Barry was married to Lois Nothem in Elk Point, South Dakota. Barry began his career as a schoolteacher and coach in Norfolk, Virginia. He moved back to Iowa in 1960, to coach the Storm Lake boys’ basketball team, leading them to The State Title in 1968. He next coached the Iowa Wesleyan University men’s basketball team from 1970 – 1975, living in Mt. Pleasant. Barry retired from coaching in 1975 and moved to Spirit Lake, where he owned an insurance agency for over 30 years. While in Spirit Lake, he was member of Kiwanis, the First Presbyterian Church, and was selected as The 2011 Citizen of the Year. In 1990, Barry was inducted into the Iowa High School Basketball Coaches Hall of Fame and in 2019, he was inducted into the Iowa Wesleyan Athletic Hall of Fame. Barry enjoyed playing golf and watching a variety of sports. He attended the Drake Relays for more than 50 years; reuniting with former athletes was the highlight of the trip every year. Barry was a devoted grandfather, faithful mentor, and trusted friend.

He was preceded in death by his parents, wife Lois, son Brad, daughter-in-law Linda Holtgrewe, a great granddaughter Harlyn, and sister Barbara Lovrien.

According to Barry’s wishes, his body will be cremated. A memorial service will be held at a later date. Burial will be in the Remsen Cemetery in Remsen, Iowa. A memorial fund has been established with the First Presbyterian Church in Spirit Lake. The Olson-Powell Memorial Chapel is caring for Barry and his family.

To order memorial trees or send flowers to the family in memory of Barry Holtgrewe, please visit our flower store.