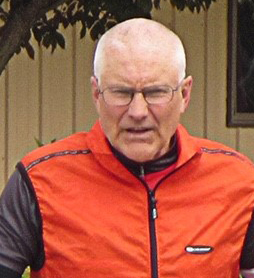 DES MOINES - Paul Black, a well-known and highly respected cyclist from Des Moines, passed away after a brief illness on Wednesday, September 23, 2020, at MercyOne Des Moines Medical Center.
Paul was born in Mount Pleasant on March 10, 1949 to Carl and Helen (Snyder) Black. He grew up on farms in the Libertyville and Fairfield area. Paul graduated from Fairfield High School with the class of 1967. After high school he attended Iowa State University earning a degree in 1972.
It was in Ames where the seeds of nearly fifty years of cycling were planted. Highlights from cycling included Paris-Brest-Paris (750 miles) in 1991; the 2,909 mile Race Across America (RAAM) where he finished 10th in 9 days & 23hrs; 6 trips to Alaska in February for the Iditasport races; and there were too many qualifying races and RAGBRI events to count. This February he was in Sebring Florida for a race and finished first in his age category on a recumbent bicycle. Paul had planned a trip to Spain this past March before travel was canceled. With all of the organized events, the rides Paul enjoyed most were casual outings with friends such as riding the temperature on New Year's Day, Wednesday night rides and riding the miles of is age on his birthday.
Paul retired from the State of Iowa as an Information Technology Specialist in 2010. After retirement Paul enjoyed teaching fitness classes and recently started teaching Tai Chi. Paul enjoyed being a "Big Brother" to his "little brother" Austin for the last 9 1/2 years.
Paul was preceded in death by his parents, Carl and Helen Black and his sister Carla Campbell.
He is survived by his two latest rescue cats Ranger and Prince, brother Frank (Amy) Black of Savannah GA, brother-in-law Dale Campbell of Mt. Pleasant IA, niece Cindy (Brian) Smith of Mt. Pleasant IA, niece Brenda (Mike) Sporkman of West Point IA, nephew Dan (Brooke) Campbell of Carlisle IA, niece Kelly (George) Barker of Jacksonville FL and nephew Jonathan (Robbie) Black of Ellabell GA.
A private graveside service will be held at Trinity Cemetery in Mt. Union Iowa. The Olson-Powell Memorial Chapel in Mount Pleasant is caring for Paul and his family.
Memorials can be made out to Memorial of Paul Black and sent to Olson-Powell Memorial Chapel PO Box 656 Mount Pleasant, Iowa 52641.

To order memorial trees or send flowers to the family in memory of Paul Black, please visit our flower store.