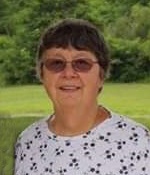 Nadine M. Mayberry, 70, of Mt. Pleasant, IA, died Saturday, February 1, 2020, at University of Iowa Hospital and Clinics with her family by her side.

A Christian Vigil Service will be held at 10:30 a.m., on Saturday, February 8, 2020, at Olson~Powell Memorial Chapel, in Mt. Pleasant, with Reverend Paul Connolly officiating. The family will greet friends for one hour prior to the service at the Memorial Chapel. Inurnment, at a later date, will be in Oakland Cemetery in Manchester, IA. Gifts of love and friendship may be given to Susan G. Komen Foundation for breast cancer or Iowa SIDS Foundation. On-line condolences may be directed to www.olsonpowell.com.

Born March 14, 1949, in Peoria, IL, Nadine Marie was the daughter of James Dale and Edith (Schaible) Hopkins. She graduated from Manual High School in Peoria. On February 22, 1969, Nadine married Danny Dean Mayberry in Peoria. He preceded her in death on November 12, 2013.

A loving and caring wife, mother, and grandmother, Nadine always put others ahead of herself. She volunteered at Southside Catholic School in Peoria and was a Girl Scout leader when her daughter was young, along with being a member of the Moose Club in Peoria. Nadine was an incredible baker, enjoyed gardening, and had a special bond with her two dogs, Max and Chance. She was a member of St. Boniface Catholic Church in Peoria and became a member of St. Alphonsus Catholic Church after moving to Mt. Pleasant in 2006. Nadine also participated in New Life Group.

Along with her husband and parents, Nadine was preceded in death by a granddaughter, Jennifer Lynn Dyar.

To order memorial trees or send flowers to the family in memory of Nadine Mayberry, please visit our flower store.