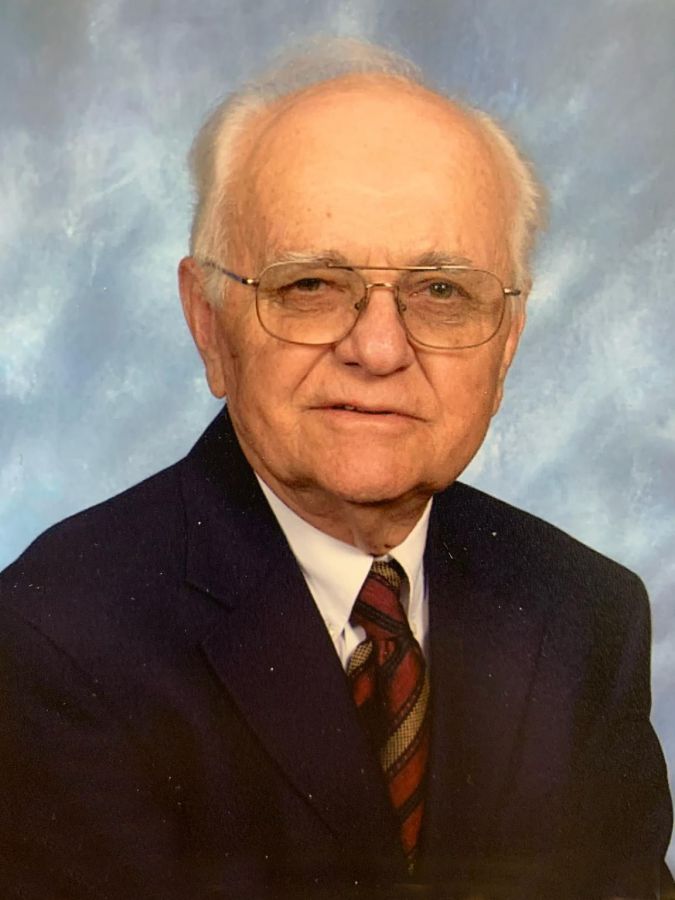 KALONA - Emil Howard Ropp, 94, of Kalona died Thursday, January2, 2020, at the University of Iowa Hospital in Iowa City.
A Celebration of Life Service will be held at 10:30 AM Tuesday, January 7, 2020, at the Kalona Mennonite Church. Rev. Scott Swartzendruber will officiate. Burial will be in the Sharon Hill Cemetery. Visitation will be held from 3:00 - 7:00 PM on Monday, January 6, 2020, at the Yoder-Powell Funeral Home in Kalona. A memorial fund has been established for Bible Memory Ministries in Goshen, Indiana. https://www.bmm.life/donate
Emil Ropp was born September 18, 1925 in rural Kalona, Iowa, the son of Solomon C. and Vesta (Yoder) Ropp. He attended school at Kalona and Cosgrove. He served in CPS in Terry, Montana and Sequoia National Park in California. After the war he was a Seagoing Cowboy on a cattle boat that went to Poland.
On November 25, 1948, Emil was united in marriage to Erma Kauffman. Emil spent his career as an agricultural salesman until 1983 when he and Erma started Country Livin' and then Wildwood Campground. He also sold All American Homes. Emil enjoyed fishing, golfing, putting together puzzles, and spending time with his family.
Emil is survived by his wife Erma, four children: James Ropp of Evans, Colorado, and his children: Jacquelyn (Larry) Bischmann, Jenna (Nick) Pittlekow, Jamie (Justin) Oltman; Juanita (Gordon) Troyer of Kalona, and their children: Andrea Troyer, Patrick Troyer, Christopher (Jody) Troyer; Vivian (Fred) Martin of Washington, and their children: Scott (Alicia) Marner, Teri (John) Ziegler, Jeff (Jenni) Marner; Kim (Kent) Lehman of Kalona, and their children: Jacob (Katie) Lehman, Michelle Lehman, Emily (Isaac) Bixler, Karlee, Katelyn, Rachel, Grace, Faith Lehman; and 5 great grandchildren. Also surviving is a sister: Cora (Levi) Miller of Springfield, OH; two brothers: Morris (Norma) Ropp of Bemidji, MN, Paul (Marlene) Ropp of Sarasota, FL; two brothers-in-law: Paul Miller of Sarasota, FL, Harley Nisly of Kalona; and a sister-in-law Anna Ropp of Harrisonburg, VA.
He was preceded in death by his parents, four brothers: Herman (Gladys) Ropp, John (Violet) Ropp, Leroy (Edith) Ropp, Wesley Ropp; and three sisters: Cleora (Sherman) Yoder, Anna Mae Miller, Norma Nisly.

Juanita, Gordon and family; sending our sympathy to you at this time of loss. Many good memories of your father while a kid at KMC. Please convey our deepest sympathy to your mother, as well!
Margaret Miller Williams

Juanita, Gordon and family. Sorry for your loss. You're in our thoughts and prayers as you go through this time.
Ivan and Jane Borntrager

Thoughts and Prayer to Erma and Family

The attached photos are added to the memorial of Emil H. Ropp to help share their legacy.

Thank you for sharing your memory of Emil