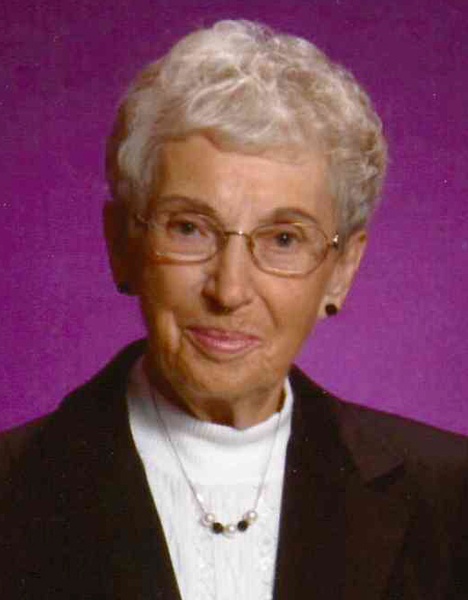 Iona Steffens, age 93, of Mount Pleasant, Iowa, passed away on February 2 at home with family by her side.

Born February 18, 1927, on a farm near Wiota, Iowa, she was the daughter of John and Sophia Campen. Her parents later moved to a farm near Cumberland, Iowa where she graduated from high school in 1944. After graduation, she took a secretarial course at Commercial Extension in Omaha, NE. She was employed at Social Services, in Atlantic, Iowa where she met Robert Steffens and they were later married on May 10, 1947. In December of 1948, Robert was promoted from Drivers License Clerk to Drivers License Examiner and they moved to Carroll, Iowa. She was employed by the Daily Times Herald, first as a receptionist and later as a teletype setter. During the time in Carroll, they had three children, Greg, Becky, and David. In December of 1961, Robert was promoted to Highway Patrol Sergeant and moved to Mt. Pleasant. She worked at Iowa Wesleyan College for 12 years in the Admissions office and later in Social Services before Robert retired from the Iowa Highway Patrol, where they retired to Fairfield, Bay, AR in 1981. There, they purchased Irene's Ice Cream and Sandwich Shoppe. Iona was an avid golfer, having had a hole in one in 1999. She was a member of Indian Hills Country Club, Ladies 18 Hole Golf Association, and a member of the Fairfield Bay United Methodist Church. After moving back to Mount Pleasant in 2005, she joined the First United Methodist Church, Charity Church Circle, and was a member of the Mount Pleasant Golf and Country Club. She also enjoyed doing crossword puzzles, playing cards, reading and music.

She is survived by two sons, Greg (Deanne) Steffens of Winterset, IA, David Steffens of Mt. Pleasant and one daughter, Becky (Joe) Salacki of Spring Hill, TN. She is also survived by six grandchildren, and six great grandchildren.
She was preceded in death by her parents and husband, Robert.

A Celebration of Life will be held 11:00 a.m., Tuesday, February 16, 2021 at Olson-Powell Memorial Chapel. Visitation will be held 10:00 a.m. until service time. The service will be livestreamed at Powell Funeral Homes Facebook page and at our website. A memorial fund has been established for Mount Pleasant Public Library and EveryStep Hospice. Burial will be at a later date in the Atlantic Cemetery in Atlantic, Iowa. The Olson-Powell Memorial Chapel is caring for Iona and her family.

To order memorial trees or send flowers to the family in memory of Iona Steffens, please visit our flower store.